The Toronto Argonauts have toiled in the abyss of not really having a home for many years. The Skydome was supposed to be their saving grace in 1989. For many years it was the greatest thing since its neighbor the CN Tower. When the novelty wore off, many fans realized that although it has history, it still isn’t a football stadium.

Seven years ago BMO Field was supposed to solve those problems. Toronto City council approved a multi use outdoor stadium for Football and Soccer. For reasons I cannot comprehend the Argonauts ownership pulled out of the project, making BMO a soccer only facility. Fast forward to today. The Argonauts have been given notice that they don’t have a home in Skydome past 2017 and which option is creeping back into the conversation again? That’s right none other than the BMO field option fueled by MLSE President and CEO Tim Leiweke.

When speaking at the TIFF Lightbox on January 28th Leiweke made mention of their BMO field plans,

“We’re going to spend $120 million to build an English Premier (League)-style stadium, with a roof that covers the seats”

He confirmed his willingness to share the stadium with the Toronto Argonauts,

Later in his speech he committed his desire to keep a natural grass field at the facility,

“I think giving fans an opportunity to go see an Argos game outdoors in a stadium with a roof that covers the seat, in a 30,000-seat environment, with real grass, is awesome, and it will help turn that franchise around.”

But the main point of contention help by the current tenants’ fan base is how are you going to keep the English Premier style stadium atmosphere that they have worked so hard to build?

Mike Leach, a TFC supporter and match day regular noted that beyond a passionate fan base having the fans right on top of the pitch is a key factor in preserving the home field advantage.  He went on to express a major fear is that the field of play is too small to support a CFL size field and expanding the floor would push the fans, particularly in the endzone areas away from the field of play.

Neil Adams, a lifelong soccer fan and senior talk show producer at 570  News in Kitchener, Ontario echoed Mike’s feelings, noting that in larger stadiums such as Commonwealth in Edmonton, or Rogers Centre push the fans too far away from the playing surface.

The second piece to the puzzle for Soccer supporters is to ensure that their game is played on natural grass. “Grass is a huge issue,” Mike told me. He also believes that the surface definitely played a role in attracting International players to MLS. “If the original fieldturf was still in at BMO, Jermaine Defoe and Michael Bradley would never have signed.”

While both Mike and Neil expressed significant concerns, they both agreed that if done right TFC and the Argonauts could happily co-exist at BMO field.

The question is how do you convert a Soccer specific stadium to a shared facility and accommodate both the CFL field and the MLS field while keeping everything that makes the BMO field atmosphere great?

The first step is to address the stands. Both endzone bleachers would need to be able to move independently to accommodate the larger CFL field. Each set of seats would push back approximately 17.5 yards. When set in the soccer position, a closed in feel would be created, keeping the supporters on top of the pitch. Other than the barriers there would be no semblance of a Football Stadium. When set in the Football position there would be separation between the stands, which in bigger games could be filled in with temporary stands to increase capacity.

The problem with natural grass is that it can only hold up to so much wear and tear before it needs to be replaced. With 20 to 30 soccer and rugby dates by the end of the year the current grass, which is heated from underneath to allow for growth in the colder months, is ready for a rest. Add 10 to 11 Argonauts games to the mix and by October you’d be looking at painted dirt.

Houston’s Reliant Stadium, home to the Texans and one of the largest Rodeos in the US, not to mention college football and US National Soccer games, uses the ModulAyr Removable Turf system from StrathAyr Turf Systems out of Australia. The grass system is used for NFL and Soccer only, while college and high school play on fieldturf type surface.

The ModulAyr grass system is set in 8×8 foot modules with a steel base, a growing profile made of sand and peat reinforced with plastic mesh elements and locally sourced grass. The surface can be changed out in 8 to 10 hours and is ready to be used immediately. One advantage of this system over a full field is that sections can be replaced quickly and easily when damaged.

Three years ago the Reliant Field came under fire when many players and coaches complained of gaps and inconsistencies on the field. Peter Casimaty, COO of StrathAyr assures that the complaints were due to high use and lack of proper maintenance. He maintained that their company guarantees the performance of its products and will make themselves available to work with stadium maintenance to resolve any problems.

For Football and other non-sporting events the grass can be removed for an artificial surface for the Argonauts and whatever surface may be required. Not having to protect a playing surface makes events like outdoor NHL games and concerts possible and more easily executed. 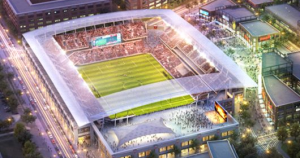 Other upgrades that need to be made to make the stadium work include adding an additional seating deck to the East stands, expanding the upper West deck and improving the amenities. Already cramped concourses need to be expanded to allow for better traffic flow and additional suites on the East side and upgraded press and game operations facilities.

The last item that Leiweke wants to add to BMO is a roof covering the stands. This makes perfect sense; it will keep the open air feel that is great for both Soccer and Football.  I would suggest using a clear roof structure similar to the proposed MLS stadium in Washington DC. The structure will be affixed to the East and West sides but not to the North and South stands to allow them to move back and forth.

If done right the second expansion to BMO field could prove to benefit both teams. The Argonauts get a more suitable, intimate outdoor stadium that they so desperately need while remaining downtown. Toronto FC gets the upgraded facilities their supporters deserve and expanded seating as they contend for MLS championships. Will this be a match made in heaven? Only time will tell.