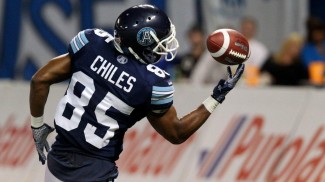 TORONTO – It was a game 27 years in the making.  For the first time since 1986, the Toronto Argonauts and Hamilton Tiger-Cats battled it out beyond an announced crowd of 35,418 at Rogers Centre in the Canadian Football League’s Eastern Final with a berth in the 101st Grey Cup championship up for grabs.

Simply put, the matchup did not disappoint.

The Tiger-Cats would get the first big break on the game’s opening kickoff as Andre Durie fumbled the football deep in Argonauts territory.  A scrum ensued and emerging from the wreckage with possession of the ball was Ticats rookie linebacker Frederic Plesius.  Luca Congi quickly converted the turnover into points as he connected on a 16-yard field goal, putting Hamilton in front 3-0 early on.

The Argos’ offence, meanwhile, promptly responded with a scoring drive of their own as Ricky Ray orchestrated an impressive seven-play, 64-yard drive capped off by Spencer Watt’s eight-yard touchdown reception.  The Argos’ veteran signal caller was a perfect six-for-six on the drive, propelling the Double Blue to a 7-3 lead.

On the ensuing Argonauts offensive possession, Ray engineered another touchdown drive as he delivered a 29-yard strike to Spencer Watt in the corner of the end zone.  The touchdown was Watt’s second of the first half, giving the Boatmen a 14-10 lead early on in the second quarter.

The Double Blue continued to add onto their lead as Zach Collaros capped a three-play, 67-yard drive with a one-yard touchdown rush.  The big play on the drive came courtesy of Andre Durie, as he took Ricky Ray’s short completion 59 yards down to the ‘Cats’ one-yard line.  Collaros then punched it in from one-yard-out, extending the Argos’ lead to 21-10.

The Argonauts’ strong second quarter continued as rookie defensive back Jermaine Gabriel intercepted Henry Burris.  The interception was the first of Gabriel’s young CFL career.  Shortly thereafter, Swayze Waters converted the turnover into points as he split the uprights from 28 yards out, giving the Double Blue a 24-10 lead.

However, before the conclusion of the first half, Henry Burris engineered a methodical 10-play, 75-yard drive capped off by Andy Fantuz’s second touchdown reception of the game, cutting the Ticats’ deficit to 24-17 heading into halftime.

The ‘Cats’ star receiver concluded the game with 11 receptions for 114 yards and two touchdowns.

Hamilton began the second half with possession of the football.  Henry Burris once again led the Ticats into the end zone, this time connecting with rookie sensation Greg Ellingson for a 14-yard touchdown, knotting the score at 24-24 early on in the third quarter.

The touchdown pass was Burris’ third of the afternoon as the Ticats’ veteran signal caller concluded the game 27-for-40 with 371 yards passing, three touchdowns, and one interception.

The Ticats then claimed the lead late in the third quarter as Burris engineered an eight-play, 79-yard drive capped off by Luca Congi’s 23-yard field goal, putting Hamilton out in front 27-24.

The Tiger-Cats outscored the Argonauts 10-0 in the third quarter.  Meanwhile, Luca Congi concluded the game three-for-three on field goal attempts.

Neither team could muster up much offence during the fourth quarter.  However, eventually the Tiger-Cats tacked on another field goal, extending their lead to 30-24 with 1:14 remaining.

Following a completion to Chad Owens, Ricky Ray threw a pair of incomplete passes, leaving the Boatmen with 3rd-and-10 at the Tiger-Cats’ 44-yard line.  Ray looked over the middle to Owens but the ball sailed high, ultimately landing incomplete.  A distraught Owens fell to his knees, removed his helmet, realizing that the Argos’ hopes at back-to-back Grey Cup titles was virtually over.

The Tiger-Cats took over on downs but were forced to punt with 20 seconds remaining in the game.  Owens returned the punt, ultimately tossing the football behind him attempting to keep the Argos’ season alive.  The football eventually bounced into the end zone where the Ticats recovered, securing a 36-24 victory.

The Tiger-Cats are off to the 101st Grey Cup championship, which will take place next Sunday at Mosaic Stadium in Regina.