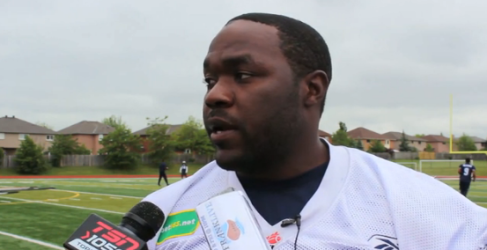 OAKVILLE – Defensive tackle Eric Foster is simply searching for an opportunity. The former Indianapolis Colt has been absent from professional football for nearly two years and says that it feels good to finally be back on a football field as a member of the Argonauts.

“It was pretty good,” commented Foster in an interview with Argos TV following his first day of practice as a member of the Argonauts. “It’s just getting acclimated, learning the defence, and getting with the guys. It was a great time to be out there.”

Foster, 28, signed with the Indianapolis Colts in 2008 as an undrafted free agent and started in 11 games during his rookie campaign.

The Homestead, Florida native played three-plus years with the Colts prior to suffering a gruesome season ending ankle injury at the beginning of the 2011 NFL season.

Foster also sat out for the 2012 season continuing to rehab from the injury and admits that it was difficult to be away from football for such a long period of time.

“I was out 2011. I suffered a real bad injury and it took awhile for me to come back from that,” said Foster. “I was out last year rehabbing, just staying in shape, and I’m just excited to get back out onto the football field.”

In 49 NFL regular season games, Foster registered 117 tackles and six sacks. Despite having not played in a professional game since Week 4 of the 2011 NFL season, Foster is confident that he will be able to contribute to the Argonauts’ defensive front.

“(I can) bring playmaking ability within the system and just fit right in,” stated Foster.

In college, Foster was a first-team All-American defensive tackle at Rutgers University as a member of the Scarlet Knights football program. Foster gained national notoriety in 2006 with his strong play and was widely regarded as one of the premier up-and-coming defensive linemen in college football.

While the devastating ankle injury is still deeply ingrained his memory, Foster believes that he has rediscovered the same confidence and ambitious mindset that made him a dominant force on the Rutgers defensive line.

“I rushed (back) and had a couple of workouts with different teams but I wasn’t really ready yet mentally,” said Foster. “Just getting past that, getting more confidence, and the mental part – I think – were the biggest keys.”

The prospect of playing in a professional football game is certainly enticing to Foster. Following countless rehab and strengthening and conditioning sessions, Foster is eager to get back into game action and make the most out of his opportunity with the Argonauts.

“It took close to almost a year and a half. When I finally got out and started working out things constantly played in my head about my injury and being nervous about guys falling on my legs,” explained Foster. “It took time to overcome that. I think the biggest thing was the more rehab I would get done and then strengthening the areas I needed to strengthen. I’m ready to go now.”