Trevor Harris (7) of the Toronto Argonauts during the CFL pre-season game at the Montreal Percival-Molson stadium on Thursday, June 18, 2015. (PHOTO: JOHANY JUTRAS / CFL)

TORONTO – The month of June is known for many things: Father’s Day weekend, the beginning of summer and eternal optimism amongst thousands of CFL fans. The 2015 season kicks off tonight in Montreal, but for the Argos it begins in the unlikeliest of places: Fort McMurray, Alberta.

It just wouldn’t be an Argo season without some form of adversity. Over the course of the past few years, the Argos have encountered a variety of roadblocks, with injuries and a sporadic home schedule taking centre stage. This year, with the Pan Am Games currently inhabiting much of Southern Ontario, the Argos kick off their 2015 campaign with five consecutive road games. Despite all this adversity and lack of consistency, the Argos have remained relevant and competitive, thanks in large part to the work done by general manager Jim Barker and head coach Scott Milanovich. 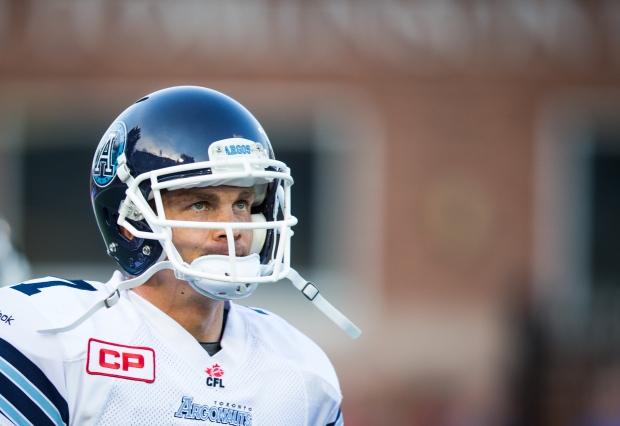 Trevor Harris (7) of the Toronto Argonauts during the CFL pre-season game at the Montreal Percival-Molson stadium on Thursday, June 18, 2015. (PHOTO: JOHANY JUTRAS / CFL)

Adding to the difficulty of beginning the season on a lengthy road trip is the fact that future Hall of Fame pivot Ricky Ray is still recovering from off-season shoulder surgery. It will be 29-year-old pivot Trevor Harris leading the Boatmen on offence, and though he’s been in the system for four years, he has only started one game for Toronto (a week 19 win against Ottawa last season). If the Argos are to avoid falling behind early in the Eastern Division standings, Harris will need to elevate his play and become a vocal leader within the confines of the Argonauts’ locker room. It won’t be easy for him as he starts the season off against three of the toughest defences in the league while trying to familiarize himself with all the new playmakers on the Argo offence. 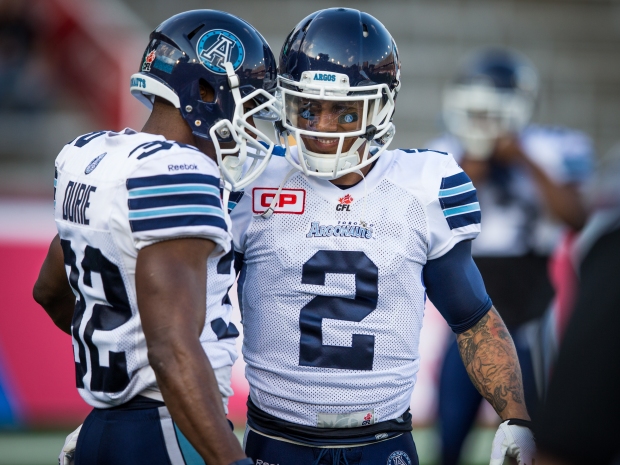 Chad Owens (2) and Andre Durie (32) of the Toronto Argonauts during the CFL pre-season game at the Montreal Percival-Molson stadium on Thursday, June 18, 2015. (PHOTO: JOHANY JUTRAS / CFL)

The Argos go into the 2015 season with only Chad Owens and Andre Durie as consistent veterans wearing the Double Blue from the playmaking positions. The Argos also see the return of Anthony Coombs and Natey Adjei who showed promise during their rookie campaigns but did not see the field very often due to injuries and other circumstances. Argos stalwart, running back Curtis Steele, will begin the season on the six-game injured list. By default, 100th Grey Cup MVP Chad Kackert and former Montreal Alouettes tailback Brandon Whitaker will start the season atop the Argonauts’ crowded depth chart. However, both men could require more time to recover from pre-existing injuries. If that is the case, expect to see rookie Henry Josey getting a majority of the reps at the running back position.

Due to considerable turnover at the receiver position, with as many as four international rookies getting plenty of playing time this season, the Argos felt it was necessary to bring in veteran Dave Stala to help out the young group. Once he is in game shape, he is expected to help contribute significantly on the field.

Toronto’s offensive line sees the return of three national starters in left guard Tyler Holmes, centre Jeff Keeping and right tackle Chris Van Zeyl. At left tackle, opposite of Van Zeyl, the Argos are relying on the big man Bruce Campbell who stands a whopping six-foot-seven and 317 pounds. The right guard position is a little unsettled for Toronto as projected starter Jarriel King is out with an injury. For now, it’ll be up to rookie Gregory Van Roten to help protect Harris as well as create holes for the running game.

All in all, this offence, led by Scott Milanovich and offensive coordinator Marcus Brady, will be prepared game in and game out, and should be able to rely heavily on veterans in Owens and Durie until Ray returns to the lineup. 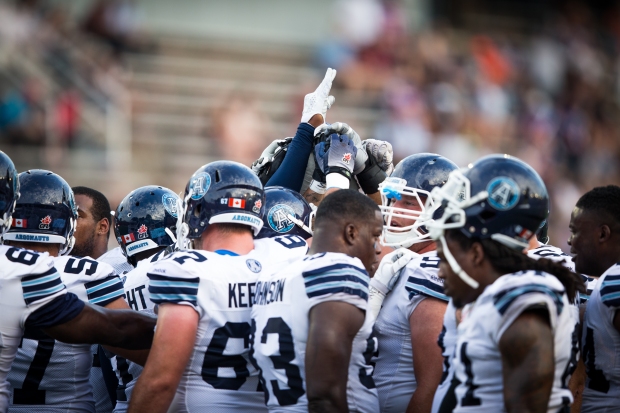 Keeping with the theme of adversity, the Argonauts defence will have its third defensive coordinator in as many seasons. Tim Burke (last year’s defensive coordinator) abruptly resigned just weeks before training camp. Head coach Scott Milanovich promptly promoted Casey Creehan to the position for the 2015 season, stating it will be a smooth transition. Creehan has been a defensive coordinator in the league, having previous stints with the Hamilton Tiger-Cats and Winnipeg Blue Bombers. Part of Creehan’s mantra is to attack the backfield, which fits perfectly with the Argos’ personnel along the defensive line.

Ricky Foley (95) of the Toronto Argonauts during the CFL pre-season game at the Montreal Percival-Molson stadium on Thursday, June 18, 2015. (PHOTO: JOHANY JUTRAS / CFL)

The Argos traded away veteran linebacker Shea Emery to bring home York alumnus, defensive end Ricky Foley, who was a key piece in the Argonauts’ Grey Cup run in 2012. Pairing him on a defenive line that already consists of Cleyon Laing and last year’s breakout star Tristian Okpalaugo should mean the Argos will be one of the best in the league at getting to the quarterback. Toronto’s football operations executives did a masterful job of injecting some youth along the defensive line by adding the likes of Tracy Roberston, Eucid Cummings and 2015 draft pick Daryl Waud. Backing up Foley and Okpalaugo will be newcomers Martez Wilson and Martin Wright. The Argonauts possess unprecedented depth along their defensive front.

There is a familiar face joining the Argonauts’ linebacking corps for the 2015 season. The outspoken, and now humbled, Brandon Issac returns to the Double Blue after being away for a year-and-a-half. He’ll join a lineup that has plenty of aggression, boasting the likes of Greg Jones, Cory Greenwood, Herve Tonye-Tonye, James Yurichuk and newcomer Brian Rolle. This unit will be responsible for stymieing opposing teams’ rushing attack as well as dropping back into coverage on pass plays. Creehan is a big proponent of blitzing, so it is safe to assume that this unit will be used in several different ways throughout the season.

AJ Jefferson (24) of the Toronto Argonauts during the CFL pre-season game at the Montreal Percival-Molson stadium on Thursday, June 18, 2015. (PHOTO: JOHANY JUTRAS / CFL)

In the secondary, Toronto is fortunate to have a young group led by third-year safety Jermaine Gabriel and first-year coach Jordan Younger. The Argos may have struck gold in the off-season signing internationals A.J Jefferson and Akwasi Owusu-Ansah out of their free agent Florida camps. Safety Matt Black is the true veteran of the group. His experience and versatility makes him a valuable asset for the Argonauts’ brash, ball-hawking secondary. If pre-season is any indication, this unit should be very opportunistic all season long, especially if the defensive line is generating a lot of pressure in the offensive backfield.

Special teams is being led by newcomer coach Scott Downing who’s job is a lot easier with Swayze Waters handling all kicking duties. Waters is as consistent as they come and should help the Argos every week with field position and scoring points. Moving the extra point to the 32-yard line may take some getting used to, but with Waters at the helm, the Argos are in good hands.

If the Argonauts can stay afloat (no pun intended) during the first month of the CFL season, they will likely be in the race for top spot in the East all year long. Dealing with adversity is nothing new for the Argonauts. Fourth-year bench boss Scott Milanovich, with the assistance of his renowned coaching staff, will have the Boatmen ready to perform come Saturday afternoon in Fort McMurray, Alberta.