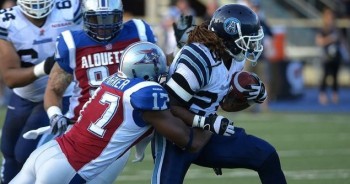 MISSISSAUGA – It is the opportunity that Curtis Steele has been waiting for.

With starting running back Chad Kackert expected to be sidelined for the foreseeable future with a knee injury suffered in last week’s road victory over the Winnipeg Blue Bombers, the Argonauts’ rookie tailback is slated to make his first career CFL start against the B.C. Lions at Rogers Centre on Tuesday night.

“My approach to the game is to do the same things I did in preparation during practice,” commented Steele following a walk-through session on Thursday afternoon.  “If I do everything right in practice, then hopefully it’ll translate to the game.”

Steele, 26, appeared in both of the Argonauts’ pre-season games this season, registering 125 yards on just 13 carries.

While he is eager to showcase his abilities on the big stage during regular season action, Steele says it is a bitter sweet moment knowing that his friend and teammate, Chad Kackert, will be absent from the Argonauts’ line-up for a significant period of time.

“First off, I was hoping he was all right,” said Steele, recalling his initial reaction to Kackert’s injury.  “He’s a good friend of mine, a good teammate, and he took a pretty hard blow to his knee so I was hoping he was going to come back within the next couple of plays or series but unfortunately that didn’t happen.”

Steele, who did not make the trip to Winnipeg, was unaware of the severity of Kackert’s injury, that is, until he received a text message from his incumbent running back a few hours following the conclusion of Friday night’s game.

“It’s your time to set the tone,” read the short message.

“We always break it down before we go into our practice.  We start by breaking it down as running backs by saying ‘set the tone’,” explained Steele.

The 5-foot-11, 206-pound Franklin, Tennessee native is confident that he will be prepared for any situation presented to him on Tuesday night and is very appreciative of the support that he has received from Kackert who was in a similar situation a year ago when he took command of the Argonauts’ running back duties following the release of Cory Boyd.

The hope is that the Argos’ rookie tailback can provide a much-needed boost to a rushing attack that has registered just 291 yards along the ground thus far in 2013, the third-worst total in the CFL.

After finishing his collegiate football career at the University of Memphis in 2009, Steele spent one full season on Baltimore Ravens’ practice roster prior to being released in 2011 during training camp.  In 2012, Steele did not play football.

In terms of containing his emotions, Steele assures that he will be focused come game day and adds that sticking to the fundamentals will be an important asset in order to be successful in his CFL regular season debut.

“It’s about sticking to your fundamentals, protecting the quarterback, holding onto the ball and everything else will fall into place,” said Steele.  “The coaches get you prepared for it and you just really have to buy in.  I just lock in and it’ll carry over to the game.”

Although he has not started a football game since 2009, Steele says that it is “time to step up” and affirms that he is ready to do whatever it takes in order to help the Double Blue collect a victory on Tuesday night.

“I finally get my opportunity and it feels good.  I feel like this is the shot and I’m ready for it,” stated Steele. “At the end of the day, we want to go out there and perform on the same level and come away with the ‘W’.  That’s the whole goal, is to win.”