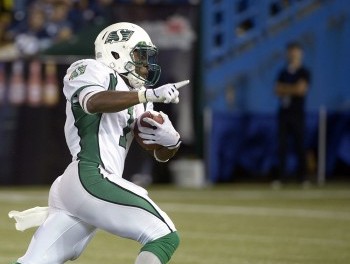 TORONTO – It is a sight that has become all too familiar for the Toronto Argonauts following just three weeks of play in this 2013 CFL season.  A combination of lackadaisical defence and unnecessary penalties ultimately result in a negative outcome.

For the third consecutive game, the Argonauts surrendered 25+ points and committed 5+ penalties as the Boatmen fell below .500 (1-2) with a 39-28 loss to the Saskatchewan Roughriders on Thursday night at the Rogers Centre.

“It’s tough at this point.  It’s certainly disappointing.  I really felt like we had a good week of practice and would play well,” stated Argonauts head coach Scott Milanovich as he assessed his team’s performance.  “Obviously, we have a lot of work left to do.”

The defending Grey Cup champions struggled to seize any momentum or produce a game-changing play when required as the Roughriders methodically exploited the Argonauts’ new-look defensive unit, particularly along the ground where Saskatchewan accumulated 224 of the team’s 478 yards of offence.

“They went to two tight ends and seemed to have some success there,” said Milanovich. “It’s a lot easier to call the running backs number when you’ve got that kind of lead and clearly they did a nice job with it.”

Meanwhile, Kory Sheets accounted for 178 of Saskatchewan’s 224 rushing yards on Thursday night as the second-year running back collected his third consecutive 100-yard rushing game to begin the 2013 season.

Sheets currently leads the Canadian Football League with a remarkable 442 yards rushing and is well on pace to surpass Mike Pringle’s single-season record of 2,065 set in 1998.

Last week in B.C., Lions running back Andrew Harris also experienced success against the Argonauts defence as he rushed for a season-high 103 yards on just 15 carries.

While Harris and Sheets are two of the most dynamic running backs in the CFL, Argonauts linebacker Marcus Ball is making no excuses regarding the Boatmen’s poor play on the defensive side of the football.

“We knew Saskatchewan was going to come out and run the football.  They’re a run first team.  They didn’t do anything unexpected, we just didn’t execute at all,” commented Ball in the aftermath of Thursday night’s loss to the Roughriders.

Correspondingly, the Argonauts pass defence also struggled to contain the Roughriders’ potent aerial attack which boasts three of the CFL’s top 10 receivers following three weeks of play in this 2013 season.

Typically, a secondary coached by defensive coordinator Chris Jones does not surrender many big plays, let alone two in one game.

However, that was the case at Rogers Centre on Thursday night as Saskatchewan receiver Taj Smith tallied touchdown receptions of 61 and 70 yards.

There was some obvious confusion in the Argonauts secondary particularly on Smith’s 61-yard touchdown as no Argo defender was within the vicinity of the Roughriders’ sophomore wide receiver.

“The first one was a little bit of a double-move and Darian (Durant) pumped an out route and I think we just came off our coverage a little early there,” said Milanovich, of the defensive mishap.  “The second one was a great throw and the receiver did a good job of leaning into Jalil (Carter) to create some separation that allowed him to get into the end zone.”

Saskatchewan quarterback Darian Durant was forced to exit the football game in the fourth quarter with an apparent lower-body injury.  The Riders veteran signal caller completed 14 of 19 passes for 245 yards and three touchdowns.

Meanwhile, the Argonauts disciplinary issues were once again at the forefront on Thursday night as the team was penalized 11 times including Khalif Mitchell’s roughing the passer penalty, which resulted in Rob Bagg’s first quarter 11-yard touchdown reception that had the Roughriders off and running early on.

Argonauts rookie cornerback Jamie Robinson had an 88-yard pick-six negated due to an illegal contact penalty as he prematurely jumped an out route, colliding with receiver Taj Smith before the intended pass had arrived within the vicinity of the Roughriders’ wide receiver.

Brandon Isaac followed suit with a roughing the passer penalty of his own and Kory Sheets capitalized on the Argonauts’ disciplinary woes as he registered his first of two touchdowns on the night.

“You’re not going to go 100% throughout the course of a game.  I think everybody knows that,” said Milanovich.  “Saskatchewan is a good team and they deserved to win tonight.”

If there is any consolation from Thursday night’s disappointing performance against the Roughriders, it stems from the offensive side of the football where the Argonauts racked up an impressive 517 yards and mustered 28 points, despite the loss.

Ricky Ray was spectacular as he completed 27 of 37 passes for 334 yards and two touchdowns. Ray connected with seven different receivers on Thursday night as he evenly distributed the football among the Argonauts’ key offensive playmakers.

Perhaps the most encouraging aspect of Thursday’s loss was the play of slotback Andre Durie, who registered seven receptions for 100 yards and collected his first touchdown of the 2013 season.

“I thought Andre played well, made people miss, did the things that his skill-set is suited for and he got us going early,” said Milanovich.

While the offence experienced a considerable amount of success against Saskatchewan, the Argonauts are once again searching for consistency and discipline on the defensive side of the football as the team hopes to return to their winning ways next week in Winnipeg.

Historically, the Boatmen have experienced success in Winnipeg, having won three of their past four meetings against the Blue Bombers, including a 24-6 pre-season victory in the inaugural game at Investors Group Field.

A trip to Winnipeg could be just what the doctor ordered for the defending Grey Cup champions, however, the 1-2 Argonauts are certainly not taking anything for granted.

“We still know we have a great defence and a great group of guys.  We didn’t come to play (this week) and we didn’t execute at all,” said Argonauts linebacker Marcus Ball. “We have to get back to the drawing board and we have to fix this problem as soon as possible because Winnipeg have a great back in (Chad) Simpson.  We’re expecting the same thing.”

2 Comments on Defence, Discipline Points Of Emphasis For Argos