Trust me it makes sense.  With a win over the B.C. Lions the Argos would clinch 1st in the East and then host a Western team in the cross-over and then stroll into Ottawa with a chance to win a grey Cup.  I’m doing a little predicting with my analysis here.

A win puts the Boatmen at 9-9, not great but it’s respectable and good enough for 1st place.  It’s a big improvement on last year’s record but is it?  Ricky Ray was injured last season and was his absence the difference between a possible 9-9 record in 2017 and the 5-13 record last season?

The vibe from the team just seems so much more positive for a team that may only improve by 3 wins.  Trestman has a united team and every time I check out practice , it’s high energy and happy. Trestman reminds of that high school teacher that told everyone they could get %100 on every test if they worked hard.

A week off and one less game is extremely important.  I’ve already tweeted on many occasions that the Western teams must be vying for a chance to finish 4th instead of 3rd so they can get through the East instead of Calgary in the West.

Now I know fans will want to tell me that the Argos had so many close games that they could easily be 11-7 but at the end of the season they only keep one set of standings and those are the real ones.

Ricky Ray is an obvious one, does that mean they stay conservative? They like his short passing game with quick releases so that’s not new but in the back of head coach’s mind is the balancing act between finishing higher in the standings or being healthy for the play-offs.  Even with S.J. Green’s great resurgence I’m hopeful he isn’t put in harms’ way.  Now let’s talk the big one.  James Wilder Sr. is a bruising big running back, that’s his game but how much touches does he get if the Argos fall behind early.  Football players play to win and if the Argos can clinch the East they will put Wilder Jr. in there on every play. 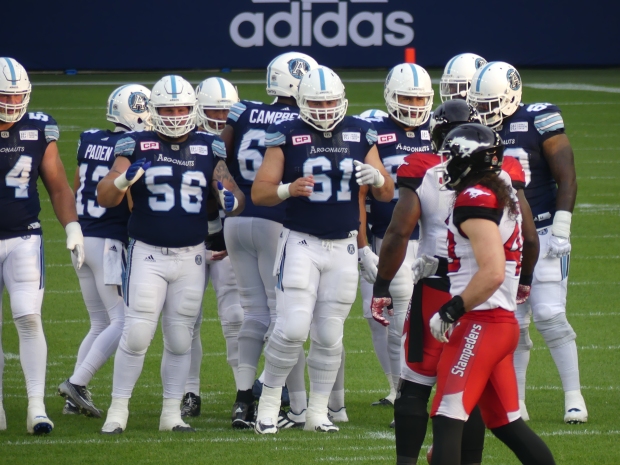 I’ve found the time in many of these game previews to ask the Argos receiving corps to step up and support S.J. Green and we’ve seen some changes. Edwards is getting touches while Posey is getting big yards so we can praise the team for improving that aspect of the game.  The play-offs mean special treatment for star players and that means double teams or spying on better players so your second option and third options suddenly become your first option. If S.J. Green can take two defenders with him then the Argos have to use that spacing to their advantage.

Who is Brian Jones?  he’s a 6’4 Canadian product stepping into the lineup for the final game of the season due to an injury. Yes he’s listed as playing 9 games but with 0 receptions he hasn’t had a chance to get the ball.  Hopefully by the end of the game Argos Nation will know who he is, that big body can post up for some short yardage gains and we all know that Ricky Ray can use that option in his very tailored short passing game. A Canadian contribution on offence would be big and help the ratio balancing act.  Plus going into the play-offs you need a new wrinkle, why not make it a player team’s don’t know much about?

The Lions have been playing some very good football with Jonathan Jennings leading them into the future.  I’ve always wondered how Wally Buono can be considered a Head coach when he doesn’t wear a head set during the games and leaves the play-calling to the coordinators but that fact is this Lions organization just seems so steady with Buono leading them on the side lines.  He is looking to move back up to the GM only spot in the booth after this game?

The Lions have a great offence.  In the games they sputtered it seemed like they beat themselves.  For Jennings he lost his starting gig to Travis Lulay but won(?) it back with an injury to Lulay in September.  Jennings still is the future for the Lions and has finished the season very well.  I expect the Lions to air out under the dome and put the Argos defensive backfield in a back-pedaling defensive mode.  The strong arm of Jennings opens the door to establish the run with Jeremiah Johnson their leading rusher but he’s also backed up by the small and agile Chris Rainey.  The combo of Oregon and Florida grads has the skill set to run and make catches out of the back field.  It sounds a lot like the new Argos backfield if Anthony Coombs’ return tonight is a positive one alongside James Wilder Jr.. Marcus Ball remains on the IR and Jennings has that wild gun slinger in him to test the newbies filling in on the Argos back field. Bryan Burnham  and Emmanuel Arceneaux are always solid choices for CFL fantasy.

Jennings is also third in QB rushing but remember he hasn’t played in every game, so he could easily lead the CFL in rushing yards for a QB.  If the returning Shawn Lemon and the DL over pursue then Jennings is gone.  I expect the Argos front four to be aggressive down the middle and make Jennings stay in the pocket.  B.C. is last in sacks allowed and that record would be even worst if they hadn’t had Jennings run for cover on many occasions.  The Argos Sack Attack was amazing to start the season, maybe we see them get back to that in the regular season finale.

Hey when the title of the section is a player’s name then you know you are more than just good.  He’s the 2014 CFL Most Outstanding Defensive Player Award and Most Outstanding Player Award and nominated for both this season.  I’m thinking the Canadian Alex Singleton from the Calgary Stampeders has an inside track but who would you choose first if you were starting a team? Elimimian is a beast , enough said and he’s also the captain of the defence.

The confidence meter will be skyrocketing with a win over B.C. tonight and will set the Argos up as a favourite at home in the East Final regardless of who they play.

A loss with-out an injury will need the coaching staff to conjure up something creative to avoid talk of a 8-10 team hosting a Western team with a better record.