The Argos find themselves in first place with a 3 win – 4 loss record in the East and most fans would celebrate a good first seven games that saw the Argos get blown out in just one game.  The problem this week is that their veteran QB is out and they are playing the second place Montreal Alouettes in back-to-back games.  Bad timing for the Argos but really when is it good timing to lose a QB like Ricky Ray to injury.

Matthews get the Start

How do you skip over Cody Fajardo who has been listed as the #2 QB in your first seven games to replace Ricky Ray?  Well, based on pre-season play Jeff Matthews has more of a drop back and stay in the pocket approach which mimics what Ray has built his game on.  Couple this with Fajardo looking to over power every pass in his mop up role last week and you can see why Marc Trestman is putting in Matthews.  Matthews has a canon for an arm, it really could change the approach for the receivers who expect that nice zone pass from Ray.  Look for the former Cornell product to have a slimmed down play book built on some long vertical passes.

I could easily have called this section Sutton vs. the Injury riddled D-line.  Montreal’s Tyrell Sutton has been averaging 5.8 yards per carry and has already seen the rock 51 times on the ground and 11 times in the air.  He’s a nice option for some dinking and dunking that Durant has learned to use as his natural skills make way for finesse over power as he keeps his career in the CFL going.

We know what S.J. Green has meant to the Argos.  Dynamic one v. one air battles that make every QB look good.  Now that the defensive backfield is cheating on double teaming him it’s time for another receiver to step up.  DeVier Posey has been on the IR which has made Anthony Coombs the second most targeted receiver.  The problem with that stat is that he is actually a running back.  I really like the chances of the long bodies of Jeff Fuller(Texas A&M) and Canadian Malcolm Willaims(Langley, CJFL) to make a statement.  Khalil Paden(Northern Arizona) sits ahead of Williams on the depth chart and as any Argo fan will tell you, it just needs to be one guy to take the heat off S.J. Green and make the defence respect the air attack has more than just one big play option. 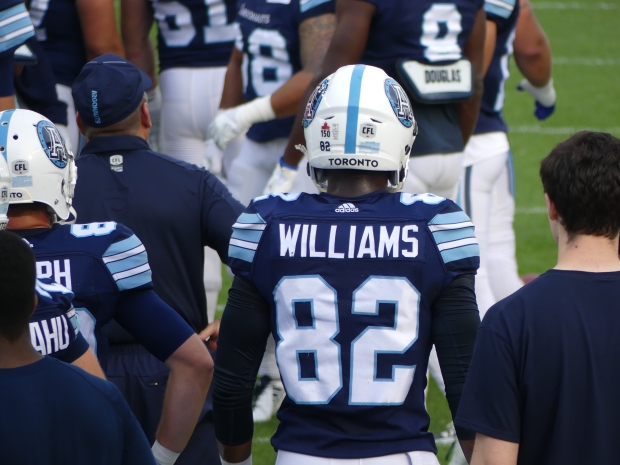 Montreal has given up a paltry 8 sacks on the season so as you can expect Darian Durant to remain successful in his new colours.  Look for the Argos to continue to be aggressive as they hope the Shawn Lemon and Troy Davis can bookend the rush. Durant has managed the ball well in both victories for the Alouettes and considering they are the only team to beat Calgary this season then you know they have it in them to play a safe game.

Game day in Montreal is an awesome CFL experience. Great pubs and food at the bottom of the mountain and then everyone walks up the mountain on a great day to watch the game.  Head to Montreal for a CFL game when you get the chance.

Yes I take my own photos, love the challenge but also it shows you how great BMO Field is for watching a game.