Toronto – Argonauts president Michael Copeland wants to give everyone something to talk about when it comes to the boatmen. He is looking for the something to be of substance and worth people’s time. When asked the question about the lack of media attention the CFL team gets, he brushed off any hint of a conspiracy theory. Instead he offered season ticket holders in attendance at the Argos Town Hall meeting Tuesday evening the cold hard facts that apart from wondering why they are losing, the team needs to do something that warrants diverting attention away from the Leafs, Raptors, Blue Jays and TFC.

Not only were we privy to a glimpse into the candid thoughts of Michael Copeland, we also got to hear form the new General Manager Jim Popp and new Head Coach Marc Trestman. Along with some great video content and Rod Smith from TSN directing traffic, fans young and old go to grill the Argos brass on everything from the ratio rules to Offensive philosophy to Marketing strategies. 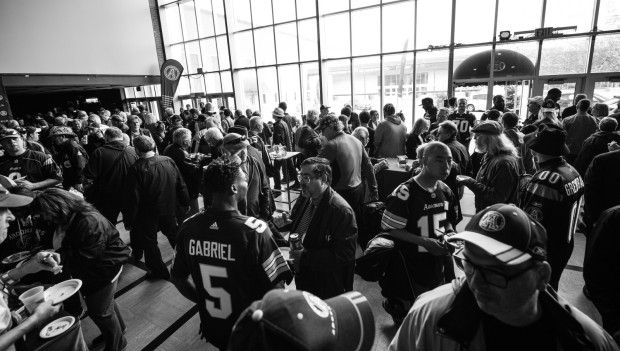 Fans during the Argos Town Hall event at Queen Elizabeth Theatre in Toronto, ON., Tuesday May 16, 2017. (Photo: Johany Jutras)

The night kicked off with a food and drink while fans got to mingle with some of the veteran and new players. From there the several hundred Double Blue faithful filled the Queen Elizabeth Theatre adjacent to BMO Field for the main event. The pomp and pageantry began with a short video introducing us to Marc Trestman. Jon Gruden, former NFL Head Coach and current Monday Night Football Colour analyst heaped praise on Trestman in a cameo appearance, calling him “Crazy” and “Intelligent”

Rod Smith took control and introduced us to our new GM and Head Coach along with team president Michael Copeland. Smith being a season ticket holder and fan himself, couldn’t resist getting the crowd riled up with several Argos chants that filling the room with the thunderous and joyful AAARRRRGGGOOOOOOSSSS! After the standard pleasantries we started to learn more about what is planned for 2017. Copeland revealed they have further plans to improve the game day experience, noting that they learned from what worked and what didn’t in 2016.

Specifically, they are starting with Fan Day making a return to the Training Camp Schedule on June 3 from 10:30 to 2:00 at York University. For those who are not familiar with the Fan Day experience, there are usually games, fun and food followed by the Double Blue Scrimmage. The Graphic on the screen noted details about the event would be revealed later.

Another video package aired, this time Derek Taylor from TSN Sports Centre gave us the Details on Marc Trestman. He highlighted his pedigree and work with older quarterbacks like Steve Young, Rich Gannon and Anthony Calvillo. He even went as far as calling Trestman ”Batman.” Although, I believe Trestman may have not lost his parents at a young age, but nobody has ever seen the two in the same room, so DTonSC may be onto something.

The Argos then turned the mics over to the fans. Most fans took the opportunity to welcome the Dynamic Duo of Popp and Trestman to Toronto before asking questions for the better part of 90 plus minutes.

We discovered that as mild mannered ad Trestman is, he is strong in his convictions and is always learning. He likes a player with Character, who can depend on.

He came to the Canadian game not knowing anything about the how things are done up hear. To help himself acclimate to our game, he took his NFL offense and added an extra receiver. From there he learned the intricacies by asking millions of questions to coaches, Popp and his players. He even, candidly, revealed that there were times he had to refer to players during games for what to do in different situations. In practice, he would often draw up plays “in the dirt” and ask Calvillo or Ben Cahoon if it would work. Coming back to the CFL after 4 years down south, he feels there is even more for him to learn.

When asked about discipline, Trestman was quick to say that he has the same conversation every year with his players about being a team. His teams need to have respect for the game and those who support it.

When it comes to the relationship between him and his GM Jim Popp, the roots extend back to 1988-89 when Trestman was in Cleveland and Popp was in the NCAA ranks. While visiting the Browns facility, Trestman openedd his office to Popp.

Popp meanwhile brings 25 years of CFL experience to Toronto. Popp looked very comfortable in the town hall format, sharing his views on the CFL and what has transpired in the last 2 months on the job. When asked about the negotiation list he pulled no punches

“You’re talking to a guy who is 100% against the existence of a negotiation list.”

He went on to say, he feels that if you are not on a roster, you should be a free agent. He also does not want to make the list public, siting the Tim Tebow distraction he dealt with in Montreal. He felt it shifted the focus of his team to a player who wasn’t on the team or someone who may or may not be coming in to take their job.

On the salary cap, Popp noted that by not immediately spending the money it allowed them to bring in SJ Green, Cleyon Laing, Alan Michael-Cash and J’Michael Dean. He even thought they had room to go out and get one or two more players.

It wasn’t all love and roses. The subject of Ricky Foley was brought up by one fan. Popp was quick to say that he was not thrilled with how the whole situation played out. While they would not comment on the contract terms that were presented, Popp did confirm that after Foley hired an agent, all communication went through the third party. When calls were not returned and their deadlines passed, they informed his agent over the phone they were moving on. Trestman then let the crowd know that they have made efforts to temper animosity between Foley and the Club. He confirmed he has spoken to Foley as recent as 2 weeks ago and cooler heads have prevailed.  He also reminded fans that Football is a business and it’s the business decisions that usually show players the door.

Mark Copeland faced a barrage of shots from the fans, including one who said her question was for the president because she knew the Head Coach and General Manager were going to do their jobs. The vast majority of the questions fired at Copeland centred around the lack of interest in the city of Toronto

Copeland was quick to dismiss any conspiracies about media biases and attendance at games. He fully admitted to making mistakes, but would not allow their successes to be tossed aside. He noted that there is much more that they have planned this year to enhance the game day experience, including Alumni events at all home games.

“Last year we were in the Hurry Up all season. This year we feel we can execute our whole game plan”

When asked about the lack of an Argonauts presence in the stadium, he noted that they did everything they could to brand BMO Field Double Blue. There will be no logos on the field, but Championship banners absent in 2016 will fly in 2017.

The absence of a home Radio broadcast in 2017 was once again a pure business decision. With ratings for CFL programming on TSN 1050 at an all-time low, it did not make sense to invest in the product. TSN TV play by play and other CFL team broadcasts will be simulcast in place. It should be noted that Copeland looked upset that this decision had to be made.

The night did end on a positive note as one wanted to know how they felt about Hamilton. While Popp and Trestman took the political route, Copeland showed us his true colours.