We’ve said it time and time again, this Toronto Argonauts team is all about the Next Man Up. In the midst of a 3 game losing streak, the Argos released “The Big 3” receivers: Tori Gurley, Kevin Elliott and Vidal Hazelton along with WR Phil Bates.

We got to make sure we’ve got guys that want to be a part of this. – Scott Milanovich

The Boatmen are trying to right the ship and get back on the road to the post season. As it looks right now, if they can win 4 straight they should be in contention for a playoff spot. The start of that begins Monday at 4 PM ET against the Calgary Stampeders, the best team in the league.

The Argos look like they are going to start Drew Willy at quarterback for the remainder of the season. Ricky Ray will assume the backup/mentor role when he is healthy. The change in scenery and more importantly coaching may be just what Willy needs to succeed. Head Coach Milanovich cited the Anthony Calvillo example when discussing his new starting QB. Now not to imply that Drew is the next Calvillo, but footballs all-time leading passer did not see success in Las Vegas or Hamilton. It wasn’t until he landed in Montreal that he was able to be the player we all remember him to be.

Our own Peter Kourtis was at practice on Friday:

Very impressed with #argos Drew Willy’s arm strength at practice have to think the @TorontoArgos can run some longer routes. @ArgosAdmirals 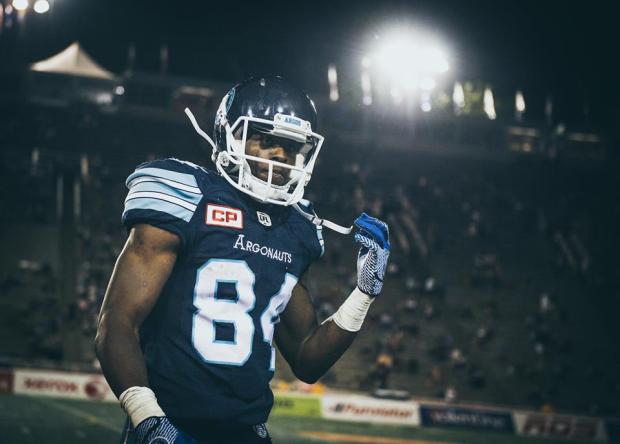 With the Big 3 scattered all over the league, the receiving corps has a new look. Dionte Spencer and Kenny Shaw along with Anthony Coombs suddenly are the go to pass catchers. Devon Wylie is another receiver, who will see more action, but it’s the 2 young Canadians that are going to benefit the most. Llevi Noel and Brian Jones, both drafted in May will both draw into the starting line up on the right ride.

Noel will play on the outside and Jones will waggle his way to the line in the slot position. Both are big receivers, standing 6’2” and 6’4” respectively. Both have been very active on special teams and look to make their mark on offense. Noel has been working hard to improve his catching ability, taking extra drills and reps after practice many days. Jones is looking to regain the form that saw him dominate all testing phases at the Combine this past spring.

B.C. Lions’ quarterback Jonathon Jennings, left, is sacked by Toronto Argonauts’ Ken Bishop during the second half of a CFL football game in Vancouver, B.C., on Thursday July 7, 2016. THE CANADIAN PRESS/Darryl Dyck

The Calgary Stampeders have one of the most punishing backs in the most punishing running backs in the CFL with Jerome Messam. The Brampton native is the league’s leading rusher and has averaged 5.3 yards per carry so far this season. The Argos Defense needs to limit Messams effect on the game. Keep his gains minimal and force the Stampeders into 2nd and long situations.

Getting pressure on Bo Levi Mitchell will be key. Head Coach Scott Milanovich does not believe anyone can get to the Calgary pivot consistently:

It’s difficult to get home on him (Bo Levi-Mitchell)… If we push the pocket, put some big guys in his lap, it could affect what he’s doing.

The Argos will go with 10 Canadians in the starting lineup this week. 8 on offense and 2 on defence. Dionte Spencer currently has at least 5 catches in his last 8 games and is the only player in the CFL this year with 5 receptions in at least 6 games this year. Brandon Whitaker is just 167 yards away from 1000 and leads the league in runs of 10+ yards with 31.