Toronto – It’s double blue against royal blue. This game marks the week 8 rematch for Toronto as they travel to Investors Group Field and face the red-hot Winnipeg Blue Bombers. After a 1 and 4 start to the season Winnipeg has won 6 straight games and find themselves in a battle with the B.C. Lions for 2nd place in the CFL West Division.  The Bombers have not qualified for the playoffs since 2011, their last season in the CFL East.

For many CFL diehards the theory is that the CFL is a better league when teams like Winnipeg are successful. The game is so beloved in the Prairie Provinces and the fans deserve to cheer for a winning product. So far the script is being written precisely that way. Of course if you’re a part of Argos Nation do you really care?

Toronto currently sits 3rd in the East with 5 and 6 record. It’s been a wild week for the Argos that began minutes after the teams win over Hamilton.  An absolute blockbuster of a deal that saw quarterback Drew Willy join Toronto in exchange for defensive back T.J. Heath and pair of draft picks has only added another story line for Saturday’s game. But since Willy isn’t starting that narrative should die down bit. I’m sure maintaining the focus on the opponent has been the challenge for Toronto’s coaching staff all week.

From this point on every game counts and frankly it’s not too soon to start scoreboard watching either. With the goal of a division title still within the teams grasp its more than okay to cheer for whoever is playing against Ottawa, Hamilton and even the potential crossover Eskimos.

Here are the 3 keys Toronto will need to go their way to end the Bomber streak at 7. 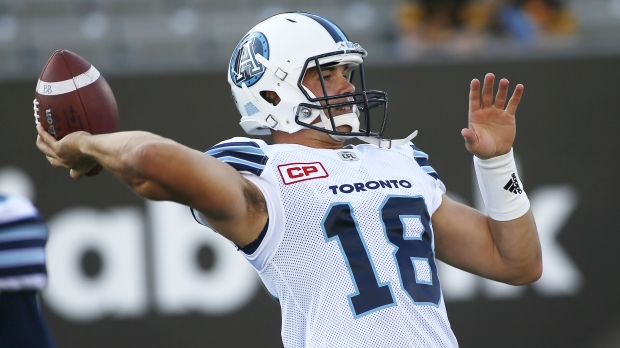 I’d love to write an Argo game preview where the quarterback isn’t the story frankly, but given the carousel that’s gone on this year that just hasn’t been possible. So again the focus will stay on Dan LeFevour who is making his second start of the season coming off a productive 329 passing yard game last week against Hamilton.  Offensive Coordinator Marcus Brady did a good job of mixing up the play calling with a series of short and long throws as well as utilizing LeFevour’s ability to scramble out of the pocket to buy time and look down the field.  However this week Winnipeg has had a full week to prepare for him so LeFevour will need to once again mix his play calling throughout the game and probably expand on what was a rather limited playbook last week. 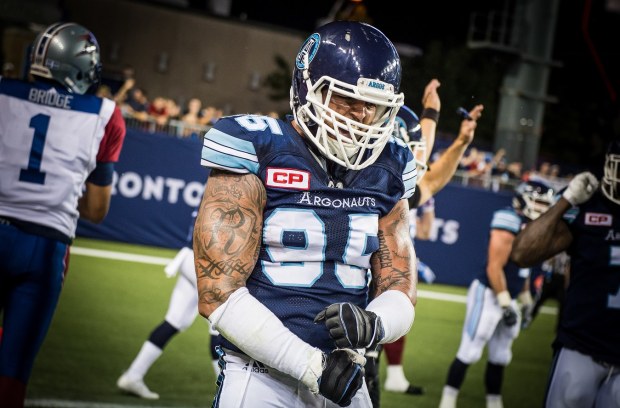 Winnipeg’s defence has been referred to as ball hawks and that’s exactly what they are. The team has forced 20 interception and 14 fumbles. You would think the turnovers stem from the defence’s ability to rush the quarterback and force a throw. But that isn’t the case. The Bombers currently rank 6th in the league with 26 sacks; 1 more than Toronto.

The turnover story doesn’t only apply to their defence either. Since Matt Nichols took over as the team’s starting quarterback he has yet to throw an interception.  This week would be as good a time as ever for that streak to end as well.

In last week’s win over Hamilton Toronto had a bunch of big plays but the biggest of them all was the Justin Hickman block punt in the 3rd quarter that led to the Double Blues second touchdown in less than 3 minutes of play. When you have a quarterback making only his 2nd start in over 2 years and so much talk has been about a trade involving the team you’re playing that week a play not necessarily counted on can really go a long way in ensuring a victory. Whether it’s a special teams play, a pick six, or even a goal line stand a play will have to come out somewhere if the Argonauts want to get back to .500 and continue their chase for a playoff spot. 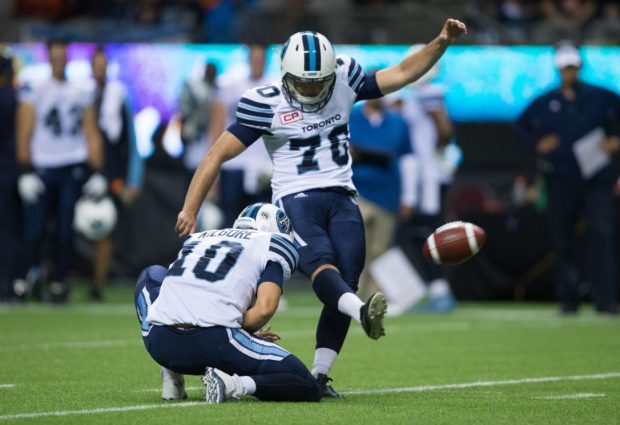 This game marks the return of Argo kicker Lirim Hajrullahu to Winnipeg. The National place kicker and punter has been nothing short of spectacular this season converting on 26 of 29 field goal attempts.

As much as I love watching a football game at BMO Field I have to say that Investors Group Field – a couple of cracks and leaks aside – may just be the nicest CFL stadium.  I also love that it’s a shared facility with the Manitoba Bisons.