Toronto – Week 9 in the CFL see the 4-3 Toronto Argonauts take on the 3-4 Edmonton Eskimos this Saturday at BMO Field. Without any attempt at all this game represents a return to the good old days when the Double Blue played at Exhibition Stadium. How? Well this weekend marks the official opening of the CNE and your Argo tickets guarantees you access to the grounds. This is probably the best way the Double Blue can blend back in to the community at the CNE grounds. An Argo game followed by spending the rest of the night at EX is a classic Toronto summer night.

As far as the game goes this is a must win for the Argonauts. Toronto is coming off a 34 – 17 loss to Winnipeg making their record so far at BMO Field a very disappointing 1 – 3. Following this game Toronto takes on the very much improved Wally Buono led B.C. Lions again at home then has to deal with the Labour Day Classic against Hamilton at Tim Hortons Field. A venue they have yet to win a game so far in 3 tires.

Edmonton is coming off a lacklustre 23 -12 win over Montreal. The Eskimos have recorded 2 wins against bad football team, Saskatchewan and Montreal as well as a win over Winnipeg before the Blue Bombers turned it around. But Toronto has been inconsistent at time so by no means will this game be an easy on. Edmonton is the best 3 – 4 the CFL has had in a long time. The Eskimos are still the defending Grey Cup Champions but have been forced to go through a transition period as most of its Coaching staff followed former Head Coach Chris Jones to Saskatchewan. Many of their players also decided to go along for the ride but there is still more than enough talent in the Alberta Capital to be heard and feared from.

Here are my 3 keys to an Argonaut victory over Edmonton.

Sorry Logan this narrative may get tiring but it’s the simple truth. Kilgore was less than stellar last week versus Winnipeg and will need to drastically improve on his 5 interception game. One bright, however, is that this year’s Eskimos defence is so far merely a shadow of its former self. The Mike Benevides led defense ranks next to last in almost all major defensive categories. They don’t sack the quarterback, they don’t force turnovers and more importantly they give up a lot of points. In fact they’ve given up 30 or more points in 4 of their 7 games. Only Saskatchewan gives up more.  Those are all potential ingredients for a successful Argo offense but if Kilgore stumbles again Toronto may be forced to think about another switch. With Ricky Ray now off the 6-game injured list this may well be Kilgore’s last start. But in a perfect world you would hope so only because Ray is healthy and ready to return, not because the team has no other choice but to rush him back.

For all the uncertainty and inconsistency Toronto has to deal with at the league’s most important position the same cannot be said for the Eskimos. Reilly is an annual MOP candidate currently leading the CFL with 2481 passing yards. He is comfortably flanked on either side by 2 of the league’s most dangerous receivers. Sophomore wide out Derrel Walker and all-star Adarius Bowman are 1 and 2 in both receiving yards and receptions. Suffice to say single coverage on either receiver could be a long day for the Argonaut Secondary.  As prolific through the air as Edmonton has been they have been merely average in terms of their running game. Will be interesting to see if the Rich Stubler led defense decides to not fill the line and play some more zone defense which may encourage Edmonton to run the ball more. Personally I’d like to see the go after Reilly as much as they can and see if they can’t get the ball out of his hands quickly. 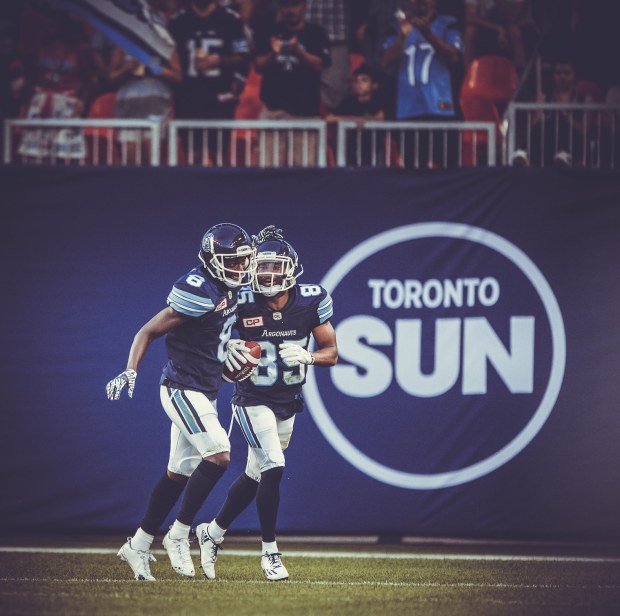 The McNeese State receiver made his 2016 CFL debut last week and wiped off whatever rust he may have had catching 11 passes for 146 yards and 1 touchdown. I’ve believed since Spencer stepped in for an injured Chad Owens last season that he is the next Chad Owens. His yards after the catch make him an instant threat and Toronto should look to get him the ball as much as possible. Quick screen passes with the ability to break one for big yards will also help Kilgore get comfortable again within the Argo offense. I would have Spencer return punts and kick offs too as Larry Taylor has had minimal impact since his debut against Saskatchewan.

Some good news from the infirmary this week as both Vidal Hazelton and Kevin Elliott make their return. The Double Blue will be as healthy on offense as they’ve been all year.  So what’s one way of stopping the other team’s offense? Keeping them off the field with sustained drives and NO turnovers.

Look for the Argonauts to wear their white helmets for the first time at home this season. I like the helmet with the white pants more than I do with their blue ones. They have yet to wear their traditional blue helmet and blue pants uniforms on the road this season.