Toronto – Its week 8 in the CFL and something has to give. Coming off their first bye week of the season the 4 and 2 Toronto Argonauts return home Friday night to host the 3 and 4 Winnipeg Blue Bombers at BMO Field. Both teams have won 2 games in a row so one streak short of a tie is coming to an end. By the way I can’t stand a game ending in a tie, but that’s for another day.

Winnipeg is coming off an impressive 37–11 home victory over Hamilton to which all of Argos Nation can only say THANK YOU! The team although ravaged by injuries to their receiving core and secondary, much like Toronto, have found a new life after their quarterback switch which saw Matt Nichols replace Drew Willy.

This should be a close game between two similarly matched teams. Both teams sit side by side with each other on key offensive and defensive categories. Winnipeg ranks 5th in total points scored with 165 while Toronto sits 6th with 148.  The Argos have scored only 1 more offensive touchdown 13 – 11 passing and 2 on the ground compared to Winnipeg’s total of 12 with 9 via the throw and 3 on the ground.

Defensively Toronto and Winnipeg rank 5th and 6th respectively in terms of sacking the quarterback. However Toronto has allowed 29 fewer points so far this season while Winnipeg leads in defensive categories like interceptions and forced fumbles.

As the Argos look to improve to 5 and 2 and stay atop the CFL East Division here are my 3 keys to the game.

Everyone has said it so I’ll just say it again. It’s a quarterback league. So that means the ball once again falls in the lap of rookie quarterback Logan Kilgore who will be making his second career start.  Kilgore played well in week 6 versus Ottawa completing a modest 25 passes on 42 attempts. While his comfort level running the offense will only grow with more playing time opposing teams now have film on the native of Sacramento. So in a game characterized by adjusting to other teams adjustments the chess match between offensive and defensive coordinators is sure to be an intense one. One thing that can certainly help Kilgore and the offense as a whole is the return to health of some its key contributors. Receiver Dionte Spencer makes his return to the tarting linenup this week to give Kilgore a deep threat. 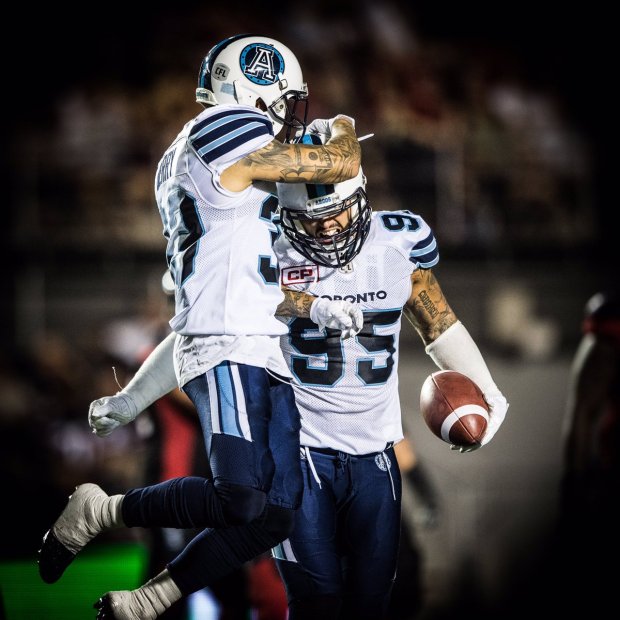 In the 3 victories Winnipeg has been able to muster so far this season the Blue Bombers were able to force 13 turnovers while committing only 2 of their own. A key statistic in any football game, Toronto must hang onto the football while trying to force some turnovers. One way to do that is with consistent quarterback pressure. The Blue Bombers have allowed a league high 21 sacks while Toronto has put opposing quarterbacks on the ground 15 times this season. Pressure in the back field leads to forced and hurried throws; a good ingredient for winning the turnover battle.

Lirim Hajrullahu (70) of the Toronto Argonauts during the game against the Ottawa REDBLACKS at TD Place stadium in Ottawa, ON. Sunday, July 31, 2016. (Photo: Johany Jutras)

The most obvious underlying story of this game is Argo kicker Lirim Hajrullahu going up against his former team. Hajrullahu struggled last season in blue and gold and was replaced by another National kicker and all-star Justin Medlock. Once again a big thank you to Winnipeg for getting Medlock out of Hamilton and out of the division. The signing of Hajrullahu was a bit under the radar for Toronto but so far the National kicker has converted on 80% of his field goal attempts; that’s the same percentage as Medlock. So does something have to give? Maybe.

Winnipeg has had to deal with a rain delay in 3 of their 7 games. Friday nights game calls for localized thunderstorms around the GTA. Is there another in the making. One can only hope not.