TORONTO – We have a rescue dog. Her name is Diva. She was born on a Caribbean island in a garbage dump. Due to poor nutrition and lack of veterinary care she has deformities in her legs and skeletal structure. She’d be a perfect poster dog for those stories we see that bring tears to our eyes.

You know the ones; a lost dog at the pound, a fighting dog, a caged elephant. “After spending a lifetime in captivity, this little guy finally got to see the outdoors and feel real grass under his feet. What he does next will shock you…” You see the joy on the animal’s face and can’t help but feel good about the way it worked out.

Attending the first pre-season game at BMO Field as a football fan was like experiencing that joy first-hand. It was ethereal and dream-like. The sky was blue, defying the weeklong forecasts of rain. The sun was hot and the breeze was soothing. The light was so perfect that things looked edited. The Argos all-blue uniforms looked sharp, the white numbers crisp and clear. The blue trim around the stands and the flags in the south end-zone were hung with military precision. The paint on the roof supports was so white it was blinding. And the grass, that glorious grass; it was green and lush and perfect, and totally understandable that the other football team’s fans would be concerned about it being ruined. The lengthening shadows across the field cried out for a James Earl Jones voiceover.

As we walked around the stadium it seemed as if everyone at the game was in the same dreamy state of mind. Everyone had grins. Maybe it was the tailgating. Maybe it was the kind of day we remember from our youth. There were greetings and salutations. Different seating sections showcased their enthusiasm in different ways. And it was spontaneous noise, for the most part unprompted by scoreboards or electronica. The noise that fans can generate is stunning in this venue. The fan in the southwest corner with the leather lungs that lead the A-R-G-O-S AAAAAAAARRRRRRRRRRGOOOOOOOOS chant has some world-class voice projection.

There were some noted differences in staff services too. From my experience in the hospitality industry I was pleased to see how well-staffed the gates were, and how well the door hosts responded in providing friendly directions to people finding their seats. The concessions were over-staffed rather than under-staffed. The security staff members were firm but friendly, (although I question the wisdom of outfitting them in black and gold during games against certain opponents). 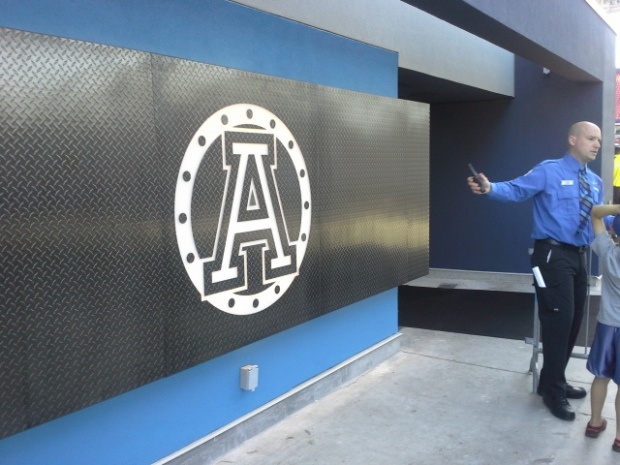 The shield logo outside the team’s dressing room is simple and eloquent. There’s a sense of pride implied in the blue ‘A’ against the dark background. The fact that the players will enter and leave through a long ramp to the field that passes by fans should prove to be a big hit. The team and the league want to engage younger fans and based on the smiles and enthusiasm from the families lining the route after the game this should go a long way towards accomplishing that.

There were some things that needed work, the sort of things that get figured out at a dress rehearsal in a brand-new building like a pre-season exhibition game. There were some volume things with the refs’ microphones, and not all the fans seemed to be able to hear the PA system. (This stadium is a great venue for Don Landry’s enthusiasm.) I’m not a drinker, but I guess if you had a beer outside and a beer inside, it averaged about $9/beer. East-side fans better bring visors and sunscreen to summer afternoon games. And I’m guessing everyone better bring extra layers for late autumn games.

There will be detractors that say it was a small crowd for a new venue. But on a perfect early summer’s day, with grads and weddings and festivals and fundraisers and cottaging and all the things that happen on Saturdays in June, I think people should be happy with the announced crowd of around 16,000 for a pre-season game, U of T’s Varsity stadium had a max of 5000. #Argos was trending on Twitter, for an un-televised exhibition game. This suggests that the fan base was engaged and active. The passion that the team’s fans have for the sport has a tremendous opportunity to be re-ignited and begin the start of a new love affair down by the water.

Like the beaten dog that takes its first few steps out of its crate, having been rescued from a concrete holding cell with worn out artificial carpet on the floor and an owner that no longer cared, Argos fans can hold out hope that the sunshine, real grass, and open arms and security of a bright future are the real thing.