In the words of SCTV’s Count Floyd from Monster Chiller Horror Theatre, “That was scary”.  Even Dr. Tongue and Bruno wouldn’t have known what to make of that game.  Fitting it was on the night before Halloween.  One of the more entertaining parts of the evening was the zombie dance to Thriller by the Argo Cheer Team.  Excellent job.

The Argonauts won the turnover battle 7-1.  They caused 2 interceptions, 2 blocked kicks both by Travis Hawkins  (one was returned for a TD by Travis), and 3 forced fumbles which they recovered.  The only turnover was a very late interception by Ricky Ray when his arm was hit as he was throwing the ball.  You would expect to win the game handily when the defense and special teams cover units are providing the offence with such opportunities.   Instead the Argos lost by 2 points.  The Argo offence could muster only one touchdown, a good 24 yard catch by newcomer Phil Bates with 51 seconds remaining in the first half to give the Argos the lead at halftime.

The second half would see some good adjustments by the BC defense and the Argo defense self destruct with penalties which allowed BC to keep drives alive and take the lead.

BC needed to win to stay in contention for a playoff spot.  They now have it as the Montreal loss Sunday eliminates Montreal.  The Argonauts are in the playoffs but will finish no higher than third in the Eastern Division and all of their playoff games will have to be on the road.  Fitting, as most of their regular season games have been on the road as well.  The Argos at the end of the day didn’t quite match the intensity of a desperate team and lost. 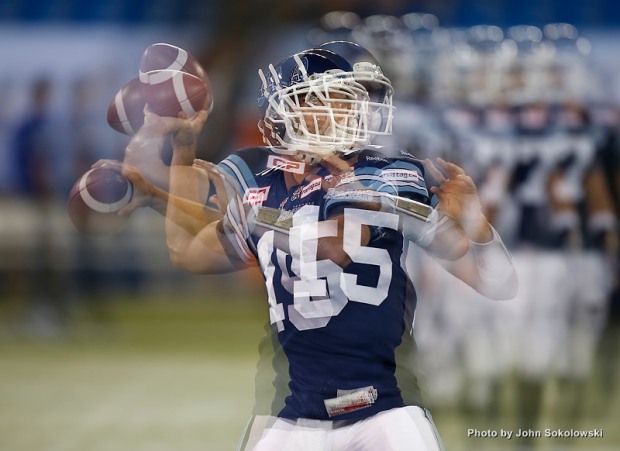 This game was Ricky Ray’s first start of 2015.  His numbers were okay; 26 of 38 passes completed for 227 yards, 1 touchdown pass and 1 interception.  What was concerning was the lack of a deep ball.  Ray is 11 months from shoulder surgery and he has been rehabbing and practicing to get his arm strength back to normal.  He is obviously not ready yet.  He can take a hit as he was sacked 6 times and forced to pull the ball down and run on 2 other occasions.  I can’t remember how many times he threw a pass while in the grasp of a defender as well.  And this is the point.  With no deep ball or even intermediate passes being thrown, the defense is going to adjust to that and go after him.  That is why he was harassed so much.  Unless his arm strength is back to where he is able to make all the throws in the playbook than for his heath, and Argo fortunes Trevor Harris should be given the starting quarterback job back.  What Ray was able to do in the face of such pressure was remarkable but he should not be thrown to the wolves like that.  Both Ottawa and Hamilton have aggressive defenses that blitz well.  With Trevor in there able to make all of the throws that will keep those defenders honest and not pin their ears back as much.

The next game against Winnipeg means nothing as far as the standings go, but the Argonauts desperately need some kind of momentum heading to the post season.  Toronto should win and they should win easily as Winnipeg just wants to finish its horrible season.  The game will be Toronto’s last at the Rogers Centre which has been home since 1989.  They should play and execute a game plan designed for Hamilton and Ottawa with their starters.  Anything less than a blowout win should not be expected.

LOTS TO WORK ON HEADING INTO THE PLAYOFFS

Team Discipline – The Argos took too many penalties and were undisciplined when calls went against them in the second half.  The defense argued calls which brought more penalties and allowed BC to score an easy touchdown.  That should not be happening this late in the season.  Whether you agree with the call or not, and the calls were suspect, you cannot argue it with a referee.  Let the captain and the head coach do that.  You cost your team and if it happens in the playoffs on the road it will cost them their season.

Running Game – We now know the Argos will be on the road outdoors in the playoffs.  The playoffs will run through Hamilton, Ottawa and if they are lucky the Grey Cup is in Winnipeg.  It is November, and despite some nice temperatures scheduled this week that won’t last.  It will be cold.  A running game would be helpful to maintain drives and keep the opposing offence cold on the sidelines.  They only handed the ball of 7 times to Brandon Whitaker.  In order to have a running game at least 20 attempts are required.  You have to keep at it.  Establishing a running game now would actually confuse defences, as the Argos are considered a pass first team.  How would Chad Kackert and Brandon Whitaker look in the backfield.

Healthy Offensive Line – The starting line was back against BC, but they could not hold off the pass rush.  They are injured and beaten up at this time of year.  I would work in as many younger o line this week against Winnipeg in order to get these guys as healthy as possible for the playoffs.  Establishing a running attack would help the o-line.  Defences would not blitz as much, and the o-line now attacks forward rather than pass blocking on their heels.

A Kicking Game – Swayze Waters.  He was the CFL Special Teams Player of the Year in 2014.  He has the strongest leg of any kicker in the league and he is a weapon that changes field position.  He has been out for weeks injured, but he will be ready this week.  I would limit him this week and make sure he is as strong as possible for the playoffs.  Toronto missed 2 field goals against BC which would have given them the points to win.  The punting was horrible too.  Another reason the BC defense was able to be so aggressive.  They were not going to be made to pay, and could play a high risk, high reward game.

Deep Ball Defense – The Argos have a hard time stopping long balls.  They are one of the easier teams to throw against.  They will be exploited come playoff time.  Whether it is scheme or match ups, this has to be worked on to get the most out of the secondary.

On a positive note, the Argo defense held the league leading rusher in Andrew Harris to 10 yards on 11 carries.  The defense played well against BC other than their discipline on one key drive and a few deep throws completed against them. 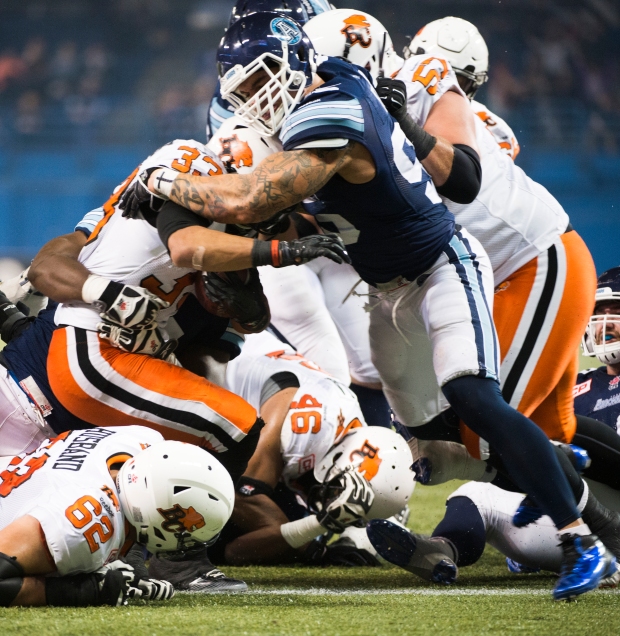 The Argos need momentum and something to feel good about before they go on the road into the playoffs.  I would start the game with the players they intend to start in the playoffs.  Hopefully execute at a high level and run up the score by halftime against a team that should not have a high compete level.  Rotate young guys and back ups in to look at them for next year for the second half.  Anyone that is slightly injured I would not bother to play in that second half.

As a fan, I want to see the team win and play well and go far into the playoffs.  But it is possible that this season has taken its toll on the team emotionally and physically.  I hope they have gas left in the tank.  They will need it, as I see other teams getting ready for the playoffs playing at much higher levels.  The West looks strong again with Edmonton, Calgary and BC all in.  While in the East it is looking like the road to the Grey Cup will go through Ottawa where the atmosphere gives their team an edge and they are riding a 40-year-old quarterback with something still to prove.