Toronto – It is week 19 in the CFL season and so far only one team has officially been eliminated from the playoffs. Fortunately for the Argonauts, they have clinched a playoff spot. However, their chances of getting a first round bye and hosting the Eastern Final are incredibly slim, and Toronto should now be focused on their two remaining games as opposed to what else is going on in the East. That needs to start Friday night at home against the 6-10 B.C Lions, who are currently fighting for the last playoff spot. Here are the five keys to the game:

It has been talked about for weeks and earlier this week it became official; future Hall of Famer, Ricky Ray, will make his first start at QB for the Argonauts this season. The whispers began a few weeks ago when Ray was taken off the 6-game injured lists and placed onto the depth chart. Toronto was not going to be making any wholesale changes right away, in fact many began to wonder if we would ever see Ray take a snap for the Boatmen this year. After dropping two straight games however, and Ray seeing limited action last week against Montreal, the Argonauts decided it’s time to get Ray his first start. Head Coach, Scott Milanovich would not commit to anything after Friday Night’s game. Ray could get hurt or feel his shoulder isn’t quite ready. In that case, the Argos would still have the opportunity to turn back to Trevor Harris without any potential awkwardness, if they had said he was firmly their backup. This is Rays 13th season in the CFL, but you can expect some rust to show early in the game. However, Ray is only a season removed from just under 4,600 passing yards and 28 touchdowns, so you can expect some fireworks, as well. Safe to say, all eyes will be on number 15 Friday Night, as he arguably could make or break the Argos season.

BC Lions’ quarterback Jonathon Jennings, left, throws downfield under pressure during the first half of a CFL football game in Vancouver, B.C., on Saturday, October 10, 2015. THE CANADIAN PRESS/Jimmy Jeong

Just a little over a month ago, the Lions season looked bleak at best. The Lions were 4-6 and without a starting QB to take over the reigns. Enter Jonathon Jennings; the first year man out of Saginaw Valley State who, in his brief sting with B.C, has the look and make of a franchise QB. In his first six CFL starts, he has 13 touchdown passes as well as a touchdown reception. He has thrown eight interceptions, but three of those came in his first start against a stout Calgary defence. Jennings has added a spark to a Lions offence that already has the league’s leading rushing in Andrew Harris. If Toronto has a hope of winning this game and, at the very least, slowing down the Lions offensive attack, getting after Jennings is where they should start. This will be just the 7th start of his career, so there are still plenty of looks he has yet to see from a defence. However, Jennings and the Lions did put up 40 on Hamilton last week at home in a statement win, so confusing him is easier said then done. Sending linebacker blitzes and even blitzes from the secondary may make you venerable to a quick pass, but if the pressure gets there it can rattle a young QB. Though most eyes will be on Ricky Ray of the Argonauts, it is Jennings who can begin to leave his stamp on the league with a good showing Friday, on national TV. 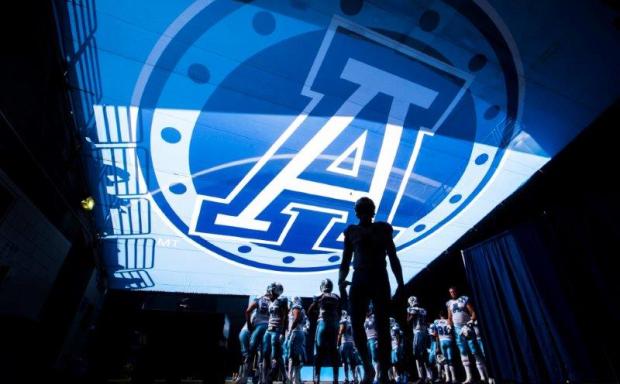 It has been seven weeks since the Argonauts played at the Rogers Centre. Politics aside, fans should rejoice that their double blue are back in town, and pack the dome for Friday Night Football. With Toronto knowing that they will play their remaining two games at the Rogers Centre, and that travelling and staying in hotels is no longer a concern, the focus should be simply on football. Toronto needs to take advantage of this. It has been a whirlwind of a season for the Boatmen and their fans, but all can be forgotten quite easily with a couple of wins to finish out the season. The Argonauts may not have to leave their home until the Eastern Final, if they play their cards right. A win Friday night against B.C goes a long way in trying to secure a home playoff game, which could ultimately mean three straight weeks at the dome. That kind of consistency in the schedule has been unheard of in these parts for quite some time. The Argonauts are 2-1 in games played at the Rogers centre this season, and are 16-14 under Scott Milanovich at the dome. Winning these final two games at home, starting with B.C Friday night, could be the exact spark the Argonauts need heading into the playoffs.

As I mentioned before, B.C Lions running back, Andrew Harris, currently leads the league in rushing, with 987 yards, and he has six rushing touchdowns to go along with it. Harris is the definition of a workhorse back, as he gets the bulk of the carries on his team, by far. Harris has 203 carries on the season thus far; the next closest guy on the team is the QB, making just his 7th start, in Jennings with 21. Without question, Harris is the Lions rushing attack and if you can stop him, you can make B.C one-dimensional. That task falls on the shoulders of the veteran defensive line of the Toronto Argonauts, whose play has dropped off as of late. This would be a good time to get them going again and make a statement. The line is lead by defensive ends, Ricky Foley and Tristan Okpalaugo, who have combined for 16 sacks in 2015. Though pressuring the QB is always nice, it’ll be their ability to set the edge and force runs back inside that will make the difference. Foley will be lined up against rookie left tackle, Tommie Draheim, who will be making just his second start. There is certainly a chance there for the Argos to make some plays. The other two men in the middle, who must eat up blocks or disengage off their man to make a play, are third year man, Cleyon Laing, and rookie, Euclid Cummings. Those two have combined for 14 sacks, which is very impressive from an interior defensive linemen group. If the DE’s do their jobs, it’ll be up to both Laing and Cummings to fill up the holes in the middle so that Harris has nowhere to go. They will also need to create holes for the linebackers to run through. With Andrew Harris, you are never going to stop him completely. The key will be to take away at least part of his game and limit the damage he can do.

To put it as simple as possible, the Argonauts need the mentality that one more loss will send them packing for the season. Even though they have clinched a playoff birth, and two straight losses now would not yet eliminate them, history says they would be all but finished. No team in history has ever finished 3rd in the East and gone on to win the Grey Cup, so those are not really odds the Argos should be toying with. This is a young Toronto team and, with very few left over from the 2012 Grey Cup team, there has been some growing pains. Lessons have been taught and learned the hard way all season long, but now, the real test is here. Toronto has an opportunity to go out and secure a home playoff game, but in order to do that they must win both their remaining games; which still wouldn’t guarantee it. Toronto shouldn’t wait until the playoffs start to get that playoff mentality and killer instinct. They should be doing that now, so that when the time comes they are prepared for what they need to do. Not all these players will know how to handle the adversity in the playoffs when it comes, so simulating that as best as you can in the final two games could be valuable. Milanovich said he didn’t believe the players were ready for the game last week; hopefully he used that during the week’s preparation and has shown this team what they are capable of. The Argos can still do great things in the 2015 season, but they have to get it started now. Play like if you don’t win, there is no tomorrow.