Toronto – For the first time in the 2015 season, the Toronto Argonauts will play in the same stadium for the second straight week. Albeit the stadium is Tim Hortons Field in Hamilton, it is the first sign of consistency for this Argonauts team. Toronto is coming off a “home” loss in Hamilton at the hands of Calgary and are looking to bounce back against a poor Montreal team. Should the Argos get back into the win column, these will be the five keys to the game. 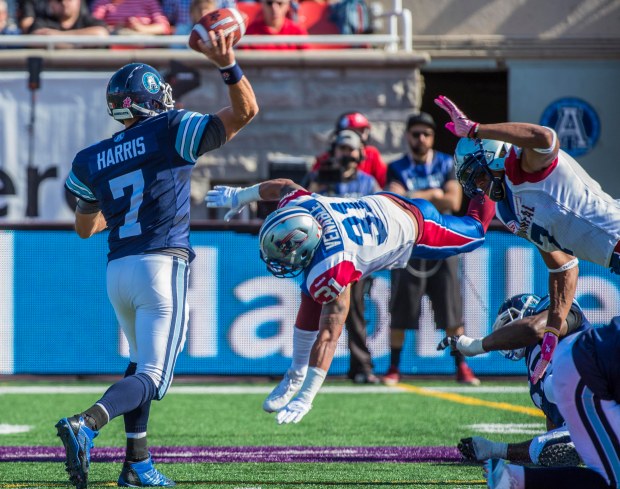 Last week was the first time in his CFL career that Trevor Harris did not look special, or look like a future franchise QB. However, even with his three interceptions, the blame cannot be put solely on Harris himself. Head Coach, Scott Milanovich, earlier this week said, he needs to do a better job of game planning for his young QB and putting him in a better position to make plays. Milanovich also alluded to the wide receivers dropping too many balls last week, which can be expected with such an inexperienced group. Fortunately for Toronto, it does not appear that Chad Owens’ injury is serious and he is likely to be back in the lineup Friday Night. Another weapon in the offence that is set to make his return after a one-week hiatus is WR, Kevin Elliot, who has been clutch for the Argos through 2015. Getting these guys back and continuing to rely on veteran running back Brandon Whitaker (who had a monster game versus Montreal two weeks ago) should help the Argos prevail at “home” Friday Night. 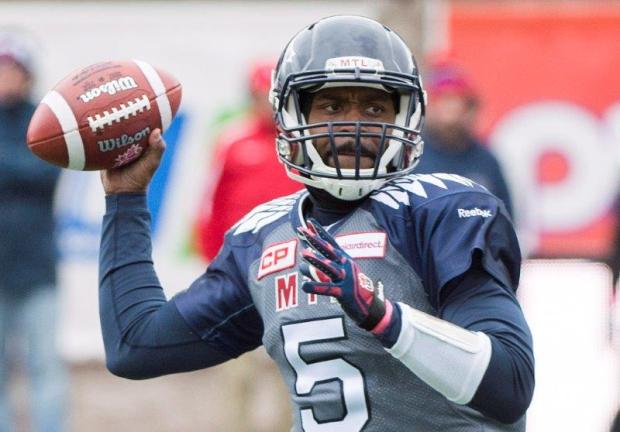 Glenn, who was traded to the Alouettes just last week, will be making his second start for Montreal on Friday night. He did not perform well last week against Hamilton, which is to be expected having only a few days to get acclimated with the playbook. However, Kevin Glenn is not a guy you want to count out and now that he’s had a full week of practice and time in the film room, he could fair much better in his second game. The Argos defence faced off against Kevin Glenn once earlier this season and it took the Boatmen until double overtime to get the victory. Glenn torched Toronto for close to 500 yards passing and completed 82.5% of his passes. The Argonauts defence has had its ups and downs all year with all the rookies they’ve started in the backend, but the defensive line led by Ricky Foley and Tristan Okpalaugo has come on strong as of late and they could be the difference maker. Glenn has been prone to untimely throws that lead to interceptions throughout his career and if the Argos can get some pressure on Glenn, they’ll likely be beneficiaries of the outcome.

Football has always been a game of inches and it has always started in the trenches. That could not be truer this Friday night when Toronto and Montreal clash for their final meeting of the regular season. Just a few weeks ago, when these two teams met, the Argos offence went downfield and scored on the first drive of the game in a very impressive fashion. However, after that Montreal’s defensive line took over the game, sacking QB, Trevor Harris four times and pressuring him into an interception. If Toronto wants to get the offence back on track and ultimately win the game, they need to do a better job of protecting Harris. That is much easier said then done as the Argos will be without starting RT, Chris Van Zeyl for a second straight game and his replacement, Greg Van Roten (who has been starting at C and LG during the year) is questionable to play Friday. 35-year-old Wayne Smith, who has filled in at both Guard and Tackle this season, is out versus Montreal which means that just a day before the Argonauts take on Montreal the Boatmen could be without three of their normal starters on the OL and the guys replacing them are fairly new to the CFL. The Alouettes defensive line, led by Gabriel Knapton, could be looking to have a huge game unless the Argonauts new starters (who are currently unknown) can hold their own in their first CFL action.

When the Argos signed Tori Gurley just six days before their first pre-season game, they could not have ever imagined what they were getting in the South Carolina product. After just six days of practice at training camp Gurley caught 7 passes for 188 yards and a touchdown in his first ever CFL action. As it turns out, that was just a sign of things to come for Mr. Gurley. In his rookie season, Tori leads the Argonauts in yards (789), is second in receptions (57), and is first in the league in touchdown receptions (10). At just 27-years old, the Argonauts appear to have found a true difference maker in their wide receivers corps who could be with the team for quite a while. Toronto has lacked a consistent weapon like Gurley since Arland Bruce III was traded away in 2009. The Argos have had success from new wide receivers over the past few season from John Chiles and Dontelle Inman, but both have since left for the NFL. Whether or not Gurley decides to do the same thing after next season remains to be seen, but now Toronto should enjoy the presence that Gurley brings both on and off the field and come Friday night, you can expect to find number 81 in the end zone at some point during the game.

Toronto Argonauts linebacker, Greg Jones, was asked about it earlier in the week and his response is what you would expect; the Argos are not content on being just a playoff team, but they won’t be watching the scoreboard either. Toronto knows that if they want to get a 1st round bye in the playoffs and be just one win away from going to the Grey Cup, they’ll likely have to win their remaining three games, and then have Hamilton lose at least one. That is quite the early Christmas list for the Boatmen. Regardless, Toronto can’t get ahead of themselves and must focus on beating the Alouettes Friday night, first and foremost. As tempting as it will be to focus on what Hamilton and Ottawa are doing, none of it will matter if the Argos cannot take care of their own business. Toronto has clinched a playoff spot which is nice to know just in case a rash of injuries occur and the Argos drop their final three games, but the opportunity to host the Eastern Final should not be taken for granted by Toronto. As fans, we will keep a keen eye on Hamilton’s remaining games that include two back-to-back contests against Ottawa, but for the Argonauts team, the focus should solely be on Montreal, then B.C and then Winnipeg. Once those games are over, then Toronto can look up at the standings and see where they rank. As always, the most important game is the next one; this Friday against Montreal.