It’s another bye week for the Toronto Argonauts who clearly could use the time off after playing 2 games in 5 against their division rivals the Hamilton Tiger-Cats. The focus next week will shift to the upcoming back to back games against the Ottawa REDBLACKS, significant games to say the least, as it currently stands Ottawa sits in 2nd place in Eastern Division 1 game ahead of the Double Blue. In the mean time, I thought it worthwhile to waive the flag for the often beleaguered CFL East Division. Yes that means I may have even something nice to say about our rival Tiger-Cats. (Editors Note: We begrudgingly allowed this to happen)

But first let’s go back in time. In 2014 CFL East teams went a combined 12 and 28 versus their Western counterparts. At one point the division standings leaned so heavily to the West that there were outcries for a 1 division CFL. The argument being that combining both divisions into 1 would ensure that the best teams make the playoffs and ultimately compete for a Grey Cup. Fortunately that argument seems to be losing its legs, at least for now. While perhaps a Calgary-Edmonton Grey Cup would be interesting it takes away from what they Grey Cup has at least symbolically become. A game that unites Canadian Football fans from coast to coast. I love watching the battle of Alberta or the Banjo Bowl but at the same time I can’t help but feel like an outsider. I don’t live there; I don’t really get the tradition or even the hatred. I’m a Torontonian, and I understand very clearly why someone from Hamilton, Ottawa and Montreal don’t like Toronto. But from a purely football perspective having your team dust off a divisional rival that geographically isn’t far from where you are makes the task of winning a Grey Cup against a team that is either travelling from a long distance or forcing you to do the same makes it feel that much bigger. Besides wouldn’t a Battle of Alberta Grey Cup game played in say Montreal lose some of its luster? Exactly.

So what’s changed this year? Why is the East so much more competitive and even at times dominant against the West? Why in 2015 have the records almost reversed? The East leads the West in head to head games by a convincing 16 to 10. We can dissect statistics until the cows come home but really the answers are simple.

First off the Ottawa REDBLACKS are no longer an expansion team. Last year’s 2 and 16 record with 1 win against the Winnipeg Blue Bombers and another that for some unknown reason escapes my mind is much improved in 2015. They have a 6 and 4 record and Quarterback Henry Burris has found his youth at the tender age of 40. Surrounded with a brand new group of receivers Burris currently ranks 4th in CFL passing yards with 2821.

Along that note is perhaps the real reason behind the change from 2014 to 2015. If you thought professional football teams win and lose with the play of their starting Quarterbacks you’d be right. After all they don’t it a Quarterbacks league for nothing. And this year the Quarterback play in the CFL East has been stellar. 4 of the top 5 Quarterbacks in terms of total passing yards play in the East. Ti-Cat QB Zach Collaros leads the league with 3286. Last year Collaros was knocked out of game 1 with a concussion and didn’t return until Labour Day weekend to a team that had only 1 win in its first 7. A healthy Zach means a different team in Steel town. 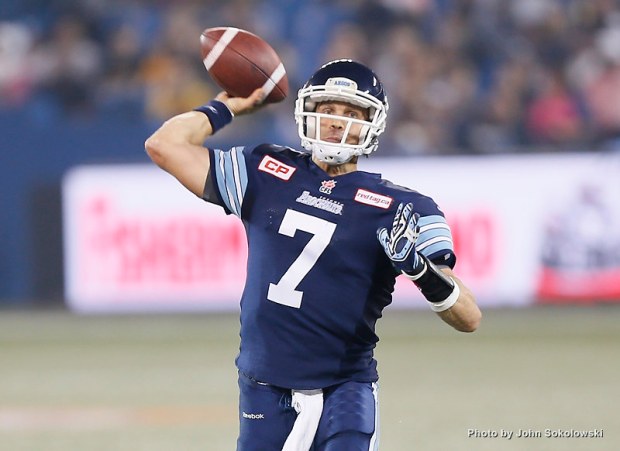 Our beloved Argo leader Trevor Harris sits 3rd with 2921. And while the Argonauts have had their share of injuries on the offensive side of the ball Harris has done a magnificent job incorporating new receivers to a system he has worked under for 4 seasons.

Compare that to the West where QB’s not named Bo-Levi Mitchell have either been injured or ineffective. Saskatchewan is 1 and 10 and down to their 3rd string QB Brent Smith. Darian Durant gets hurt in game 1 versus Winnipeg and their season begins to dwindle. Add an injury to 2nd string Quarterback Kevin Glenn and the season is effectively over.

In Winnipeg their story is similar to their Prairie rival. The BlueBombers are 4 and 7 and have ridden a Quarterback carousel all season long. With a season ending injury to Drew Willy Winnipeg now looks to their 4th incumbent starter Matt Nichols to help steer the ship.

The BC Lions story is a little different but the ending remains the same. After two years battling season ending shoulder surgeries Travis Lulay returned and the hope was his play would lead the team back to respectability. Unfortunately a new offensive scheme led to some growing pains which saw Lulay throw almost as many interceptions 10 as touchdown passes 12. Now Lulay is out with sprained ligaments in his knee and have handed the ball to 32 year old back up John Beck who made his first ever CFL start against Ottawa in week 12. It was a game the Lions would lose and an inept offense not gain 220 offensive yards in total.

Only the Edmonton Eskimos have survived inconsistent Quarterback play. With the game 1 injury to starter Mike Reilly Edmonton still managed a 6 and 4 record. In his first start last week against Calgary in the Labour Day rematch Reilly threw for 352 yards and 3 touchdowns. Prior to that Matt Nichols started 9 games and threw 8 interceptions and only 7 touchdown passes. But now Reilly is back and Edmonton joins the discussion as to being legitimate Grey Cup contenders.

With 6 games left to go in a season described by the parity as any other make no mistake about it, every teams success or failure will begin with the play of their starting QB. Montreal currently sits 4th in the East at 4 and 6 but would technically be the carry over team should the playoffs start today. Can you imagine a 2015 playoff that included all 4 CFL East teams. In 2014 you would have been laughed out of the room. And maybe a 1 division CFL should be adopted. After all Toronto vs Hamilton in the 102nd Grey Cup would be awesome.