TORONTO – I’m no stranger to road trips.  Growing up in small-town Alberta meant that most of our hockey, baseball and soccer games were played in other small towns, and in the case of provincials, would be a four-to-five-hour trip (each way), usually to get our butts handed to us by a bunch of bigger, stronger farm kids that had played together since they were old enough to help with chores.

Our town didn’t have a theatre so even that meant we had to make the drive to Edmonton to see movies.  It also meant that I didn’t see any of the Star Wars movies until they came out on VHS years later.

I visited Europe for seven weeks.  My brother and I rode our bikes from Vancouver Island to Baja, Mexico, camping the entire way.  I once hiked the west coast trail by myself in early October and hitchhiked to the Grand Canyon during semester break at cooking school.  It was snowing, I couldn’t see the canyon, only the inside of a snow globe; biggest disappointment ever to a northern Alberta boy.  Well, that and any time a Calgary team won a Cup.  And I drove from Edmonton to Toronto without a road map to join the girl I’d met months earlier.  Needless to say, I have no qualms about making the drive down to see my local CFL team.

This season, the Argos themselves are no strangers to extended road trips.  By the time we see them at their home-opener against the Roughriders on August 8, it will be Week Seven of the 2015 CFL season.  Joining the team at Rogers Centre will be a dedicated group of fans that make a road trip each and every home game to support the Double Blue.  Living elsewhere, I was always under the illusion that Argonaut fans hopped, skipped and jumped from their downtown condos to the taxi, and then to the stadium.  In reality, I’ve met more Argo fans that live and work outside the 416 area code and make a special effort to attend the team’s home games.  These aren’t the chardonnay-drinking and sushi-eating corporate event-goers that show up at other sporting events.  These are the blue-collar, hard-working men and women who love the CFL for the dedication of the players and the sense of identity and personality that they bring to the game.

Like me, Bill Juby makes the trip to games from Peterborough.  Bill’s dad, Bill Sr., was a longtime sportscaster for the local television station and shared his love for sports with his son.  Juby wasn’t a football fan first, however.  Peterborough breeds hockey and lacrosse players but it became a passion for him.  He played high school football, jokingly crediting himself with one career tackle.  Nevertheless, that one tackle illuminated the intensity of the game and generated a lifelong passion for Canadian football.  At Argo games, Juby enjoys sitting in the end zone in order to see the play open up and develop in front of him.  His favourite in-game moments include cheering on the defence to make a goal-line stand or watching the offensive line play smash-mouth football.

When Juby goes to an Argos game (he’s only missed one in 10 years) he makes an entire day of it, driving the 90 minutes to Oshawa’s GO station, taking the train to Union Station, and walking down Front St. to meet friends and fellow end zone season ticket holders at a favourite pub for food and drinks before the game.  They’re usually at the game early to see warmup’s, visit with other fans, and warm up their vocal cords.  You’ve probably seen the group of them in full fan regalia on the big screen during big moments of the game.  By the time post-game analysis has been hashed over back at the pub, the trip back on the train, and the subsequent 90-minute return drive to Peterborough, it sometimes makes for a 12-14-hour day.

This is a committed group of fans.  Bill tells me he’s been a season ticket holder for 10 seasons now, and they’ve seen their core group in Sec 122 and 123 grow, with the furthest commuters being fans from Parry Sound who never miss a game.  They have created a fan-driven website, where amongst blogs and op-eds, they also create gems like this video:  http://www.argosendzone.com/argos-video-tribute/#more-2116 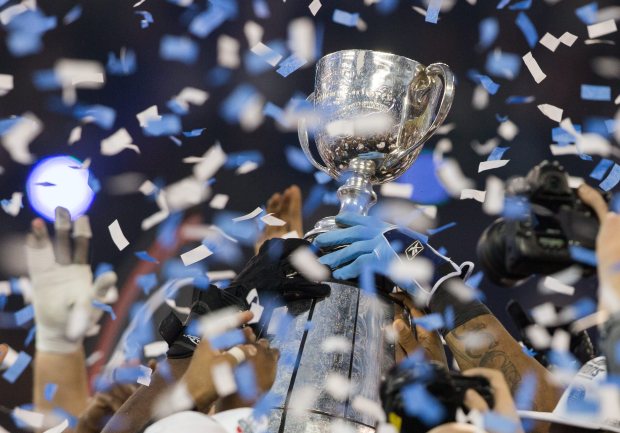 Like most fans, Bill has highlights from his ten years in the end zone. He was at the first “Wendy’s Kick for a Million” where a fan kicked a 50-yard field goal to win the grand prize.  He saw Damon Allen’s record-breaking evening for career passing yards.  A friend won a truck on fan-appreciation night.  The Argos winning the 100th Grey Cup in front of a loud and boisterous home crowd ranks up there as an all-time moment.

Sitting in the end zone, he’s also had a chance to meet fans from other teams.  The best fans to cheer against/with were from Montreal.  And to no one’s surprise, Tiger-Cat fans bring the most noise and animosity to the shared space behind the goal posts.

He’s had an opportunity to meet several players and team media members over the years, including TSN Radio play-by-play commentator Mike Hogan and in-stadium announcer Don Landry.  When I asked him whose voice he heard in his head when he writes his blog, he thought that it was probably his words in a blend of his dad’s voice and some of his favourite sportscasters.

Given a choice of a dream road trip, Bill would love to take VIA rail to either Ottawa or Montreal to watch the Argos in somebody else’s end zone.  And like many Argo fans from the 905, 705 and beyond, while we’re looking forward to the team’s home games starting on August 8th, we’re also eagerly anticipating our own version of Willie Nelson’s “On the Road Again” so we can cheer on #OurTeam in person.