So, after 3 games (all on the road), the Argos have put together some impressive stats.  Trevor Harris has connected on 74 of his  99 pass attempts (74.7% completion average), boasting a league-best quarterback rating of 124.5.  Brandon Whittaker has accumulated 220 yards along the ground, averaging nearly eight yards per carry.  We have some real talent at the skill positions this year, no question. But those kinds of numbers only happen when you have an offensive line that is giving the quarterback time to throw the ball, and is opening holes for the ball carriers.  So here’s a little bit of recognition for the hogs who work their magic in the trenches. 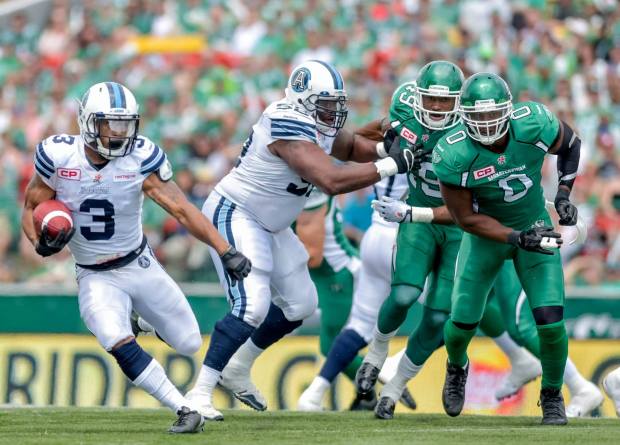 Becoming a top offensive lineman takes a great deal of maturing.  The core of the offensive line is composed of three veteran Canadians (Nationals) who have honed their skills over the past several years – Wayne Smith (#1 draft pick in 2004), Jeff Keeping (2005) and Chris Van Zeyl (2007).  Just now coming into his own is 28-year-old Tyler Holmes.  He was the Argos’ first round draft choice   in 2011, but opted to explore his options south of the border prior to joining the Boatmen.  These four have now been working together in the same system for over two years, and are playing as a highly effective unit.  And in the hopper is the highly-coveted Matt Sewell, who, after being drafted eight overall in the 2013 CFL Draft, tried his hand in the NFL with Tennessee, and then went back to complete his MBA at McMaster University.

Jim Barker dreams of one day having an all Canadian O-line, and that could happen.  However, two great international signings this off-season have already made important contributions.  Gregory Van Roten comes to the Argos having spent two years with Green Bay, and one with Seattle in the NFL.  When Jeff Keeping was injured in pre-season, Van Roten filled in at centre and has done a great job in Keeping’s absence.  The other is Bruce Campbell who plays left tackle.  This is the toughest and most important position along the offensive front, because it is his responsibility to protect the quarterback’s blindside. Campbell comes to the Argos after stints with the NFL’s Oakland Raiders, Carolina Panthers and New York Jets.  Although a CFL rookie, his previous professional experience has prepared him for this important role with the Double Blue.

On the other side of the ball, our defence had given us the opportunity to win all three games. The big men who clog up the middle and pressure the opposing QB also deserve recognition.

The bookends of the defensive line are Ricky Foley and Tristan Okpalaugo, as good a pair as you will find in the CFL.  Foley returns to the Argos under Casey Creehan’s defensive system which gives him free reign to pressure the quarterback.  Okpalaugo, situated opposite of Foley, was last year’s premier find.  A bit small for the NFL, he is the perfect body type for a CFL rush end. Last year, he was nominated not only as the CFL’s top rookie, but also as Argos’ most outstanding defensive player. 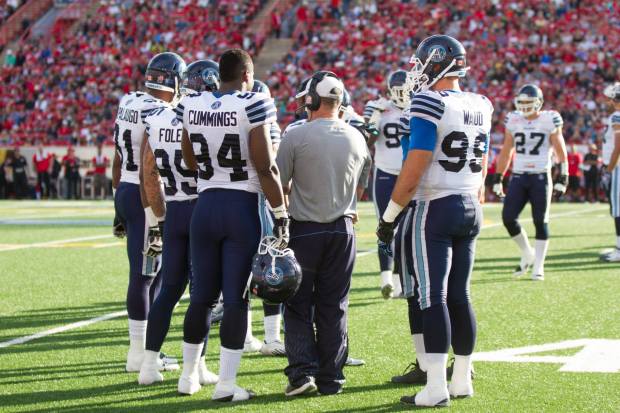 The interior of the line is manned by third-year Argo Cleyon Laing and sophomore Euclid Cummings.  Laing has become one of the CFL’s top Canadian linemen, while Cummings, also a bit light at 280 pounds for the NFL, rounds out the front four.  This group is backed up by Martez Wilson, one of the pleasant surprises coming out of this year’s training camp, and Daryl Waud, who voluntarily left the Washington Redskins camp in order to play for the Argos.

The assembling of the talent on both the defensive and offensive lines is no accident.  For years, the Argos have tended to draft high quality players who get passed over by other teams because they run the risk of catching on with an NFL team, or for some other reason, may not immediately play in the CFL.  Tyler Holmes and Matt Sewell on the offensive line were drafted this way, as were Cleyon Laing and Daryl Waud on defence.  Another was linebacker Cory Greenwood who was drafted by the Argos in 2010, and only came back to the Canadian game last year.

The other source of these productive linemen is the mini-camp’s the Argos hold each year.  Those have provided the Argos with Okpalaugo, Wilson, Cummings, Campbell and Von Roten.

After three tough games, all on the road, we like what we see.  As Ricky Foley says, this is the highest level of talent we’ve seen in some time.  There is every reason to believe the big boys on the Argos can provide the foundation for a very successful 2015.