TORONTO – Oh the life of a field goal kicker. One day you’re a relative unknown the next you’re either a hero or a scapegoat. This is the reality for 23 year old Ronnie Pfeffer out of Wilfrid Laurier University and the new kicker for the Toronto Argonauts.

He watched the 2015 CFL Draft come and go and not have his name called. With a year of eligibility left Pfeffer focussed his attention on returning to school where he would complete his degree in Sociology.

“I was just going to train all summer and get ready for another season and school year. The reality in football is you never know when you’re name is going to get called and when you may show a team how you can help them win games.”

That opportunity for Pfeffer would come while he was at his Kitchener home watching the Double Blue take on the Edmonton Eskimos and saw the 2014 Special Teams Player of the Year Swayze Waters limp off the field and into the locker room. A couple of days later, after it was announced that Waters would be out of action for up to 6 weeks with a groin injury, Pfeffer was invited to take part in a kicking competition for the now vacant position. It was job he would win and so far run with.

“It’s always been a dream to be a professional athlete and showcase my abilities in front of the entire country is great” says the National Kicker.

To suggest he was thrown in the fire would be an understatement. His first time on the field wasn’t for a kickoff or even a punt. No the 5 foot 11 inch kicker got his number called early in the game for a 50 yard field goal attempt.  It was a kick he would make and also tie his longest make while at Laurier kicking for the Golden Hawks. 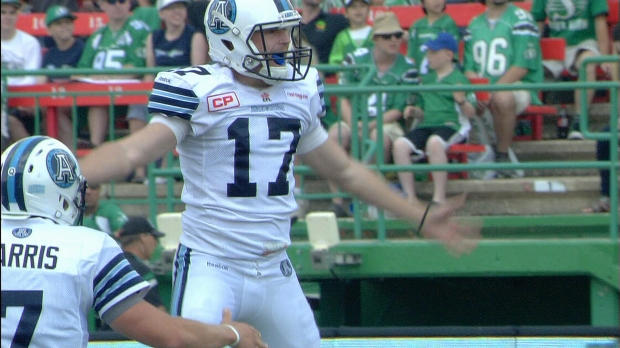 “When I knew I made it I just couldn’t keep my emotions in check. I started jumping up and down because it was complete affirmation that all my hard work and sacrifice to this point has paid off.”

Prior to his CFL debut Pfeffer’s, most significant game in his University career was a 4 field goal game against Waterloo while he was sophomore.

“I thought a Laurier homecoming in front of 12000 fans was crazy but 30,000 Rider fans screaming against you was absolutely incredible.”

Of course like nothing else in life sports are a “what have you done for me lately” business. While happy he made his first field goal Pfeffer would also miss 2 attempts and have the game resting on his foot with 6 seconds left. After a Chad Owens touchdown Pfeffer would be asked to kick a 32 yard extra pointer to tie the game. The increased distance is a new to the CFL this season, and while its intention may have been to encourage teams to go for a 2-point conversion, it definitely puts added pressure on a team’s field goal kicker.

“it’s definitely different kicking from the 32 rather than the 12 yard line but in the end it’s a kick you just gotta make.” And he would.

As the team prepares for their upcoming game against Calgary, Pfeffer knows he’s only scratched the surface on what he hopes is a long career. And given that Swayze Waters is expected back with the team Pfeffer has no idea what the future holds.

“At this point I’m just taking it all in. Other than some cities in Ontario and a trip to Edmonton I haven’t had the chance to see much of the country. I’m just looking forward to going to Calgary and playing football.”

For this young kicker he may soon not forget his trip to Sasktachewan.