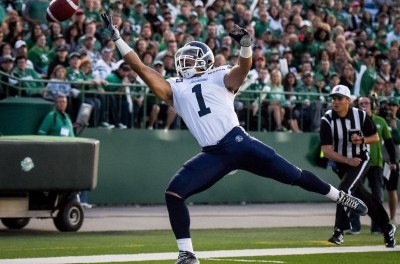 Last night, the Saskatchewan Roughriders came back from a lousy couple of weeks to feast on the hapless Toronto Argonauts. All game long, TSN’s Glen Suitor and Chris Cuthbert kept reminding their audience that the team wearing double blue in Mosaic Stadium was not the ‘real’ Toronto Argonauts because of their injury situation.

Despite throwing to ‘nobody’, Ricky Ray and Trevor Harris completed 31 passes for a respectable 301 yards. Darian Durant completed 9 passes all game for a grand total of 155 yards. Edge Toronto.

Saskatchewan signed free agent tailback Will Ford on Tuesday, and put him in the game after only three practices. Three touchdowns and 113 yards rushing was the result. The Argos were far less productive on the ground, but the excuse was injuries along the offensive line. Regina’s own Dan Clark made his first ever CFL start at centre for the Riders, and there was no drop off in production.

This Argos team will go nowhere, so long as they continue to believe they can’t win without certain players in their lineup. Injuries are part of the game. Championship teams overcome adversity by staying disciplined, executing their assignments, and holding themselves accountable.

Injured players returning to the lineup will NOT lead to a turnaround on the field. Players with injured attitudes returning to championship form will cause the change. It’s as simple as that.

Jarrett Rusnak is President of Dacian Productions Inc.  He concentrates his efforts on writing, producing and directing, though you will also find him behind a camera capturing images, or in an edit suite pushing buttons. He blogs recularily (www.jarrettrusnak.com) and has a habit of referring to himself in the third person when writing bios. Jarrett lives in Toronto, but remains a prairie boy at heart (born and raised in Regina). He has been working in the film & television industry since 1995.