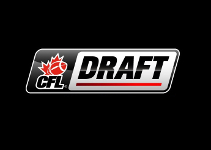 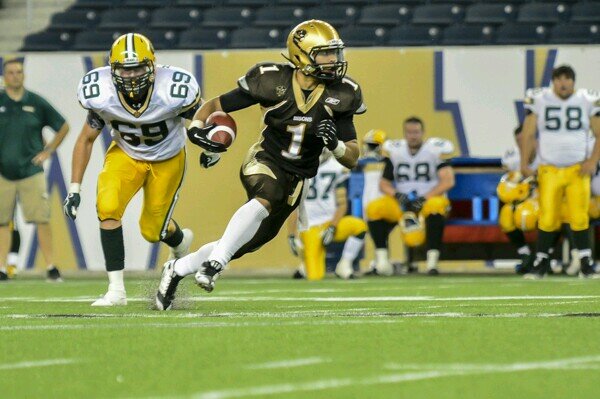 Give your head a shake and catch your breath. The CFL draft burst out of the gates with a flurry of activity. We saw the Argos trade up to get their man and Pierre Lavertu go number one, as expected, but not to who you expected.

The Toronto Argonauts made a bold move to jump to the number 3 spot to pick up Running Back Anthony Coombs out of Manitoba.  The trade saw Toronto acquire the 3rd overall pick, from Edmonton, along with the 21st in the 3rd round and the rights to a negation list player. In exchange the Argos sent their first (6th) and second (15th) round picks along with imports OL Tony Washington & DB Otha Foster and the rights to a negotiation list player back to the green and gold.

General Manager Jim Barker expressed that they had to, “move up to get the guy they wanted.” Barker went on to say, “Coombs has great quickness, catches the ball well, and we believe he will fit very well into what we do on the field. We’re looking forward to seeing him in training camp.”

Coombs finished out a stellar four year career at the University of Manitoba rushing for 2,232 yards and 17 touchdowns. Through the air he tallied 51 receptions for 840 yards and 11 touchdowns.

Not to be out done Calgary snagged the first pick in the draft from Ottawa and chose the projected number one OL Pierre Lavertu from Laval. Ottawa got Gott (John Gott) in exchange for the first pick and the rights to OL Marwan Hage (retired)

The REDBLACKS made climbed back into the first round by shipping Kevin Glenn to BC for the 5th overall pick. They then flipped that picks with Montreal to get DB Antoine Pruneau.

Like the draft, I am jumping around here. Winnipeg, probably dizzy from all the movement around them, stood pat at number 2 and picked up Matthias Goossen from Simon Fraser.

At the number 5 spot the Alouettes selected David Foucault from the home town Montreal Carrabin’s.

Calgary, back on the board at 7, picked the number 1 ranked defensive Lineman, Quinn Smith. With an impressive combine showing, Smith shot up the rankings and was once projected to go as high as the third spot. A positive drug test at the evaluation camp means he will be immediately enrolled in the league’s substance abuse program.

Hamilton then picked back to back to close out the first round, after a trade with Saskatchewan. Going in the eighth spot was mobile Western Linebacker Beau Landry and ninth was Manitoba DL Evan Gill.

A versatile lineman, who saw action on both sides of the line, but found his place at guard last year. For his efforts he earned All- Canada West and First Team All- Canadian honors.

Won the starting MLB job in his freshman year as a Bison. Brings added value as a long snapper. Could replace Chad Rempel but will have to compete for the job with fellow linebacker Jake Reinhart. 110 Tackles; 3.5 Tackles for Loss; 1 Sack; 1 Forced Fumble; 2 Fumble Recoveries.

Big blocking back at 6’4” 245lbs. Has overcome 2 knee injuries. Compared to Patrick Lavoie of the Ottawa REDBLACKS. 2013 RESQ All-Star

2013 AUS All-Star, Speedy DB with High Football IQ. Did we mention he is the brother of Argos Safety Matt Black, so we know he has great genetics. Duane Forde questions his strength, as he only completed 3 reps in the bench press.

Two All- GNAC honors as a punt and kick returner. 58 receptions 748 yards 4 TD in 38 games for the Clan. Ranked as the top 6 receiver by Ridley Scouting. Will need to get stronger to compete with the CFL DBs