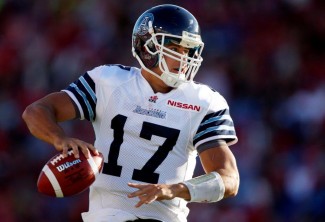 CALGARY, AB. – On a night when the Calgary Stampeders welcomed Canadian military as well as police and fire first responders to McMahon Stadium for Heroes’ Night, the Toronto Argonauts had their sites set on revenge after the Stampeders defeated the Boatmen 35-14 at Rogers Centre earlier this season, losing starting pivot Ricky Ray in the process.

Fast-forward to week 14 and both the Stampeders (9-2) and Argonauts (7-4) currently sit atop their respective divisions. The Stampeders took over sole possession of first place in the West last weekend after they defeated the Hamilton Tiger-Cats 26-22 at McMahon Stadium.  The win also clinched a playoff spot for the Stamps, making Calgary the first team to qualify for the post-season in 2013.  The Stampeders entered Saturday night’s game with a perfect 5-0 record at McMahon this season and have won 10 straight home games dating back to August 18, 2012.

Coincidentally, the last team to march into Cowtown and defeat the Stampeders on their own home turf was the Argonauts, who have won two straight in Calgary dating back to 2011.

Injuries continue to be an ongoing concern for the Double Blue.  Quarterback Ricky Ray missed his fourth consecutive game on Saturday night after injuring his throwing shoulder against the Stamps in the aforementioned 35-14 beat down at Rogers Centre earlier this season.  Slotback Chad Owens continues to be hampered by bruised ribs, an ailment that has kept him off of the football field for the past three weeks. Running back Chad Kackert finds himself back on the sidelines after suffering a concussion in his very first game back in the Argonauts’ starting lineup last week against Saskatchewan. However, despite the injury woes, the Argos entered Saturday night’s game riding a mini two-game winning streak accompanied by a league-best 4-1 road record.

Second-year quarterback Zach Collaros made his fourth consecutive start on Saturday in Calgary. In Ricky Ray’s absence, Collaros has passed for 817 yards, four touchdowns, and three interceptions.  Meanwhile, his counterpart, Kevin Glenn, returned to the Stampeders’ starting lineup on Saturday after missing two consecutive games due to a leg injury.

The first two games of the Argonauts’ current four-game road trip have been a tale of two halves.  For two consecutive weeks, the Boatmen trailed at halftime but managed to regroup inside the locker room and grind out a pair of second-half comeback victories.

The notorious slow-starting Argos forced a two-and-out from the Stampeders’ offence to begin the football game.  Zach Collaros led the offence out with favourable field position after a strong punt return from Trent Guy.  However, the Argos’ offence failed to move the chains and was ultimately forced to punt.

On the ensuing Stampeders’ offensive drive, Pat Watkins intercepted quarterback Kevin Glenn, setting up the Boatmen with first-and-goal inside Calgary’s five-yard line.  Zach Collaros quickly capitalized on the turnover as he connected with John Chiles in the back corner of the end zone, giving Toronto a 7-0 lead early on.

The touchdown reception was Chiles’ eighth of the season and his fourth in as many games.

Looking to respond, the Stampeders handed the football to reigning CFL Most Outstanding Canadian Jon Cornish as he ripped off an impressive 18-yard run up past midfield.  Kicker Rene Paredes capped the drive with a 52-yard field goal, cutting the Stampeders’ deficit to 7-3.

Moments later, the Calgary defence would their make their presence felt as linebacker Juwan Simpson forced a sack-fumble on Argonauts quarterback Zach Collaros, providing the Stampeders with possession of the football at the Argos’ 27-yard line.

Kevin Glenn redeemed himself for his earlier miscue as he completed an 11-yard touchdown pass to Jabari Arthur, putting Calgary ahead 10-7.

The touchdown reception was Arthur’s first of the 2013 season. Arthur concluded the game with seven receptions for 68 yards and one touchdown.

Following a first down completion to Andre Durie, Zach Collaros and the Argos’ offence struggled to sustain the drive, forcing them into a punting situation.

The Argos defence once again stymied the Stampeders’ offensive attack forcing a quick two-and-out.  Rob Maver booted the ensuing punt 59 yards into the Argonauts’ end zone, resulting in a rouge, extending Calgary’s lead to 11-7 after one quarter of play.

Swayze Waters responded with a single-point of his own as he booted an 80-yard punt, which rolled several yards before coming to a halt at the back of the Stampeders’ end zone, cutting the Argos’ deficit to 11-8 early on in the second quarter.

A frightening moment for Argonaut fans as slotback/kick returner Trent Guy came up limping after returning a punt 16 yards up to the Argos’ 37-yard line.  Guy appeared to be favouring his left knee and slowly made his way to the sidelines.

Fortunately for the Double Blue, Guy remained in the football game as the Argos’ primary punt returner.

Facing a second down situation, Zach Collaros dropped back to pass but was once again stripped of the football, this time by Charleston Hughes, as Juwan Simpson recovered the ball at the Argonauts’ 20-yard line.

Positioned with second-and-goal at the Argos’ one-yard line, backup quarterback Drew Tate plunged forward into the end zone, extending the Stampeders’ lead to 18-8.

The big play on the scoring drive came courtesy of Jerious Norwood, who took Zach Collaros’ short swing pass 29 yards down to the Stampeders’ two-yard line.

Pinned at their own one-yard line with less three minutes remaining in the first-half, Zach Collaros marched the Argonauts into Calgary territory, setting up Swayze Waters with a 42-yard field goal attempt at the tail end of the second quarter.  Waters, however, failed to connect on the field goal, missing the kick wide to the left.  Stampeders’ kick returner Larry Taylor brought the football out of the end zone, maintaining Calgary’s 18-15 lead heading into halftime.

Leading by three points to begin the second-half, Larry Taylor returned the opening kickoff 33 yards up to the 54-yard line.  The Stampeders made quick work of the drive as Kevin Glenn tossed a 17-yard touchdown to slotback Marquay McDaniel, extending the Stampeders’ lead to 25-15 early on in the third quarter.

The touchdown reception was McDaniel’s fifth of the season and his second against the Argonauts in 2013.  McDaniel concluded the game with six receptions for 87 yards and one touchdown.

Zach Collaros and the Argos’ offence have built a reputation of being a second-half team. As in recent weeks, the Argos’ offence delivered big plays when needed.  Calgary’s 10-point lead was short-lived as Collaros orchestrated an impressive four-play, 82-yard drive capped off by Dontrelle Inman’s 28-yard touchdown reception, reducing the deficit to 25-22.

The big play on the drive came courtesy of wide receiver John Chiles, who turned a short comeback route into a 35-yard catch-and-run, putting the Argonauts deep in Stampeders territory.

For Chiles, the Argos’ rookie receiver concluded the game with five receptions for 62 yards and one touchdown.

On the ensuing Stampeders’ offensive possession, Pat Watkins, who had picked off Kevin Glenn in the first quarter, registered his second interception of the game, marking the first multi-interception game of his young CFL career.

Watkins’ interception could not have come at a more crucial moment as the Stampeders were driving deep into Argonauts’ territory looking to widen the gap midway through the third quarter.  Watkins managed to step out in front of the intended receiver Kenny Stafford and keep two feet inbounds while hauling in Kevin Glenn’s arrant pass.

The Argonauts converted the turnover into points as Swayze Waters connected on a 40-yard field goal, knotting the game at 25-25.

Following a pair of first downs at the tail end of the third quarter, the Stampeders’ drive came to a screeching halt, forcing Calgary into a punting situation.  Rob Maver’s 38-yard punt rolled out of bounds at the Argos’ five-yard line, putting Zach Collaros in a difficult position to begin the fourth quarter.

Zach Collaros connected with John Chiles and Andre Durie for back-to-back 14-yard gains prior to being sacked by Keon Raymond, forcing the Double Blue into a punting situation.

The touchdown was Bradwell’s first of the 2013 season and Collaros’ fourth touchdown pass of the game.

With less than five minutes remaining in the fourth quarter, Rene Paredes failed to connect on a 47-yard field goal attempt, resulting in a rouge, cutting the deficit to 32-26.

Facing a long second down situation with less than three minutes remaining in the game, Kevin Glenn delivered a strike over the middle as Marquay McDaniel made a spectacular one-handed grab, picking up the necessary first down yardage and prolonging the drive.

Three plays later, facing third-and-four Glenn hit Brad Sinopoli in stride as he marched 67 yards into the end zone for what initially appeared to be the go-ahead score.  However, the touchdown was called back as Jabari Arthur was penalized for offensive pass interference, forcing the Stampeders into a punting situation.

The Stamps received another chance, though, as Kevin Glenn took over at his own 30-yard line following a single-point punt from Swayze Waters, widening the margin to seven points (33-26).

With less than 10 seconds remaining, Bo Levi Mitchell entered the game at quarterback as John Hufnagel and the Stampeders lined up for a Hail Mary attempt to tie the football game.  Mitchell heaved the ball deep into the end zone and after the ball was bobbled on numerous occasions, Calgary wide receiver Anthony Parker hauled in the pass, but was out of the bounds.

On the final play of the game, Mitchell completed a short pass to Jabari Arthur, who then kicked the football into the end zone, which by CFL rules is a live football.  Fortunately for the Double Blue, Alonzo Lawrence was the first player to pounce on top of the ball, securing possession for Toronto and hanging on for the dramatic 33-27 victory.

Zach Collaros earned his third victory since taking over as the Argonauts’ starting quarterback in place of injured pivot Ricky Ray.  On Saturday night, Collaros completed 25 of 36 pass attempts for 330 yards, four touchdowns, and no interceptions.

Running back Jerious Norwood tallied 133 total yards while Andre Durie hauled in a game-high nine receptions for 64 yards and a touchdown.

The Argonauts run their winning streak to three consecutive games and will look to sweep their four-game road trip next weekend in Edmonton.

The victory also marked the Stampeders’ first loss at McMahon Stadium this season and also accounted for their first loss against an Eastern Division opponent in 2013.