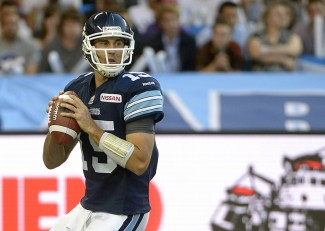 MISSISSAUGA – It has become somewhat of a cliché, a statement that has been used time and time again to describe Toronto Argonauts starting quarterback Ricky Ray.

Despite appearing in just two quarters of in-game action over the course of the past two weeks, the Argonauts’ veteran signal caller appears to be in mid-season form as he currently ranks third in the CFL with 1,355 yards passing.

Over the course of his last two starts, Ray has completed 34 of 38 pass attempts (89.5 per cent) for 438 yards and five touchdowns.

Most impressive about Ray’s hot play of late is the fact that the 33-year-old Californian has done it while nursing a left knee injury, the same knee that he injured a year ago and resulted in him spending over a month of the season watching from the sidelines.

“I wouldn’t say I’m fully 100 per cent but I’m getting there,” said Ray following Friday’s practice.  “It just takes a little bit of time.  I’m wearing this brace and protecting it but hopefully by the end of the year things will be feeling pretty much back to normal.”

Although Ray may still be feeling the effects of the knee injury he suffered against the Winnipeg Blue Bombers earlier this season, his play suggests otherwise.

After setting a new Argonauts franchise record for completion percentage in a single season (68.6 per cent), Ray has picked up right where he left off in 2012, connecting on 76.4 per cent of his passes thus far in 2013.

For Ray, the Argos’ modest offensive captain credits the team’s coaching staff for putting him in the best possible position to succeed.

“We’ve just been playing well as a unit,” stated Ray.  “We’ve had really good game plans and the coaches have been doing a good job of putting us in good situations and giving me a lot of different throws against different coverages.  We’ve just been executing really well.”

Perhaps the individuals who deserve the most credit for Ray’s blazing start to the 2013 season are those stationed along the offensive line.  Through six games this season, the Argonauts offensive front has surrendered just 10 sacks, a total that currently ranks first in the Canadian Football League.

“I think it starts up front with the offensive line and we’ve been getting really good pass protection,” said Ray.  “That gives me more time to see what’s happening downfield and then obviously the receivers are making the plays.”

Ray’s 11 touchdown passes rank second only to Saskatchewan’s Darian Durant (15), and coincidentally, both he and Durant are the only starting quarterbacks in the CFL that have yet to throw an interception thus far in 2013.

As the Argonauts prepare to welcome the Edmonton Eskimos into the Rogers Centre on Sunday night, Ray says he feels much more comfortable facing his former team this time around, especially after defeating the Eskimos in the Eastern Semi-Final a year ago.

“The first game was going there and returning back to the same stadium,” said Ray, who spent the first nine years of his CFL career in Edmonton.  “The second game was, you know, we lost the first game, can we beat them the second game, and the third game was the playoffs. Playing your old team in the playoffs, it’s kind of like last year we went through almost every scenario. This year, I still have a lot of memories from there, but it feels kind of like just another team coming into town.”

Despite facing a short-handed Eskimos squad that will be without reigning CFL Defensive Player of the Year J.C. Sherritt, Ray remains focused on the task at hand as the Double Blue prepare to kick off a pivotal three-game home stand.

“That’s always the challenge when you’re playing well and winning football games is to not let up,” explained Ray.  “We still have to do the things that have gotten us to this point which is practice hard, study, and just pay attention to all those little details.  I felt like we had a good week of practice and the guys are going to be ready to play.”

In terms of the absence of Sherritt, Ray added, “He’s a special player but whenever they don’t have one of their defensive leaders that certainly helps (us) out.”

Although each team is seemingly headed in different directions, Ray is not willing to overlook the overall ramifications of Sunday night’s game as the Argonauts hope to create further separation in the CFL’s Eastern Division.

“I don’t think anybody is really thinking ahead to the next game.  I think we’re all pretty focused on this game and coming off a big win against a division rival last week, we understand what the importance of this game is,” stated Ray.  “Every game you win and other teams in your division do not do the same, that creates more separation for first place.”

“When we’re playing good football all around, that’s what can happen.”