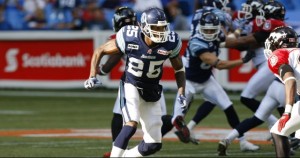 MISSISSAUGA – Toronto Argonauts’ second-year, import starting cornerback Patrick Watkins has come a long way since he entered the CFL in 2012. Following a five-year stint in the NFL from 2006-2010, Watkins elected to take his professional football career north of the border to Toronto where he has become one of the premier shutdown cornerbacks in the entire Canadian Football League.

It was a year ago at this time that Watkins was still adjusting to Chris Jones’ comprehensive defensive system while still learning all the different aspects of the Canadian game. The 30-year-old Tallahassee, Florida native admits that the transition from the NFL to the CFL was difficult but firmly believes that the move allowed him to obtain a fresh start and showcase his awe-inspiring athletic abilities to a new national audience.

“As far as on the field, I understand our concepts much better this year and that goes as far what defensive schemes are designed to do (specific) things and what schemes can be versatile in certain down and distances,” said Watkins of the strides he has made since his rookie season. “I understand the concepts better and I am prepared for what can be called at any moment.”

In 2012, Watkins started all 18 regular season games for the Double Blue including the team’s home playoff game against the Edmonton Eskimos in the Eastern Semi-Final.

Watkins missed both the Eastern Final and Grey Cup championship game due to an ankle injury.

With a trip to Montreal on the horizon this week, Watkins recalls one particular play at McGill Stadium from a year ago that provided him with the confidence to be able to perform at a high level on a consistent basis.

“I’m going to be honest, on that play, I just happened to make a good play (on the ball),” said Watkins of his interception in the end zone against Montreal from week five of last season. “I probably wasn’t even in the right coverage at the time now that I think about it.”

While Watkins may still be fairly new to the CFL, the Florida State product has faced no shortage of adversity over the course of his professional football career. In 2010, Watkins’ football career was temporarily put on hold as he suffered a season-ending knee injury while playing with the San Diego Chargers.

Watkins required surgery and was forced to miss the entirety of 2011 while recovering from the devastating injury.

Watkins is very much a happy and joyful individual, but he still cringes every time he recollects the unfortunate events that put his football career in jeopardy three years ago.

“I hurt my knee on a kickoff,” began Watkins. “I don’t try to go into detail. Basically, I was forced to wear this brace after injuring my PCL.”

As the years have past, Watkins has learned to embrace his struggles and adds that his knee brace, which he wears every single time he steps out onto the football field, provides him with extra motivation to prove that he belongs at the highest levels of professional football.

“It’s a part of me,” stated Watkins. “I’m comfortable with it, I train in it and practice in it. Like I said, it’s a part of me and I don’t even think about it anymore.”

Watkins has garnered plenty of attention for his tremendous combination of size and speed, which provides him with the ability to defend both fast receivers as well as more physical opposition.

At six-feet, five inches tall and 205 pounds, Watkins has gone head-to-head with some of the toughest and most experienced receivers in the Canadian Football League over the past year.

However, with that distinction comes the fact that opposing offences are not particularly as willing to throw the football in your direction, leaving very little room for error and also minimizing the opportunity to make game-changing plays.

Through five games thus far in 2013, Watkins has tallied just 15 tackles and has yet to record an interception. Watkins admits that it can be frustrating when the ball is not headed in your direction but remains focused on executing the Argos’ defensive schemes and taking care of what he can control.

“I’ve noticed that but at the same time I’m going to keep re-instating that I’m going to act like the ball is coming to me every play. I’m going to continue to try to perform at a high level but I haven’t had as many balls towards the boundaries as last year,” said Watkins.

Part of that is the fact that Watkins is no longer a rookie. The Argos’ star cornerback is a known commodity and teams always wary of his presence on the football field.

“I’m pretty sure with a lot of games remaining it’s going to happen,” explained Watkins. “I just have to keep my composure and stay within my technique, within my range of talent and utilize it.”

Tampa Bay Buccaneers cornerback Darrelle Revis garnered national attention when he labeled his side of the football field as “Revis Island”, a phrase that he has trademarked for his ability to shutdown the opposing team’s number one receiver.

A similar trend appears to be developing north of the border with Watkins. However, the Argonauts’ sophomore cornerback is not concerned with individual success but rather, is focused on doing everything in his power in order to assure that the Argonauts can return to where they were a year ago, atop the football world, as Grey Cup champions.

“It’s all about our defence. It isn’t about me and if the defence is playing great, then that’s all that matters,” stated Watkins. “As long as when the play does come my way, I will do my best to capitalize on a game-changing opportunity. If the defence overall is doing well, then there are no complaints.”

1 Comment on Pat Watkins: The Evolution of A CFL All-Star