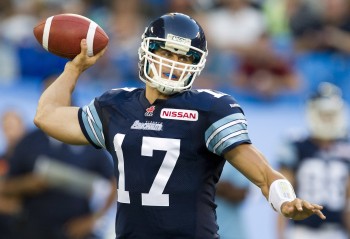 TORONTO – With quarterback Ricky Ray and running back Chad Kackert both sidelined due to knee injuries (Kackert expected to be out 4-6 weeks) following last week’s game in Winnipeg, the Toronto Argonauts turned to a pair of youngsters behind centre on Tuesday night at the Rogers Centre.

In limited action this season, Collaros had completed 7 of 10 passes for 112 yards, while adding a rushing touchdown against the Saskatchewan Roughriders in week three of the 2013 campaign.

Argos fans may also recall Collaros’ game-winning drive during last year’s regular season final against the Hamilton Tiger-Cats, a victory that knocked the black and gold out of playoff contention.

Argonauts head coach Scott Milanovich elected to err on the side of caution this week against B.C. as the team hopes to have their offensive captain, Ricky Ray, back in time for a pivotal divisional matchup with the Montreal Alouettes on August 8.

Also making his first career CFL start on Tuesday night was non-import, rookie tailback Curtis Steele. The 26-year-old suited up in both of the Argonauts’ pre-season games this season, registering 125 yards on 13 carries.

Keeping in mind the Argonauts’ recent struggles against B.C., a new and unpredictable duo in the backfield was just what the doctor ordered for the Double Blue. Entering Tuesday night’s game, the Boatmen had lost six consecutive games against B.C. including a 24-16 loss in week two.

With questions surrounding the Argonauts offence, it was the defence that provided a jolt to kickoff Tuesday night’s game as Khalif Mitchell recorded his second sack of the 2013 season on the game’s opening drive.

On the Argonauts’ ensuing offensive possession, Zach Collaros coughed up the football as the Lions brought extra pressure in a second down situation. The fumble was Collaros’ first turnover in the CFL and gave the Lions possession of the football in Argonauts territory.

Travis Lulay quickly converted the turnover into points as Nick Moore hauled in a 36-yard reception, setting up the Leos with first and goal at the Argos’ two-yard line. However, the Argonauts defence responded as they stuffed the Lions on two consecutive plays, resulting in a Paul McCallum field goal, putting the Lions ahead 3-0 early on.

The Argonauts capitalized on the turnover as Zach Collaros slipped past a Lions defender and connected with wide receiver Jason Barnes for a 21-yard touchdown, putting the Boatmen ahead 7-3 in the second quarter.

The touchdown reception was Barnes’ third of the 2013 season and the completion was Collaros’ first career touchdown pass in a CFL regular season game.

The Lions responded with a methodical eight-play, 51-yard drive capped off by Paul McCallum’s 17-yard field goal, cutting the Argonauts’ lead to 7-6.

On the ensuing kickoff, Argos’ special teams coordinator Mike O’Shea utilized some trickery as the Double Blue ran a reverse play. Chad Owens initially returned the kick, only to flip it off to Quinn Porter, who rumbled up to midfield.

The touchdown was the first of Robinson’s CFL career.

The Rogers Centre crowd of 20,064 made their presence felt late in the second quarter as the Lions offence were penalized on three consecutive plays including a time count violation, which resulted in a loss of a down and forced the Lions into a punting situation.

After Paul McCallum cut the Argos’ lead to 14-9 with a 17-yard field goal, Zach Collaros led the Argonauts on a five-play, 79-yard drive capped off by John Chiles’ first career touchdown reception, putting the Argonauts ahead 21-9 in the third quarter.

Filling in for injured wide receiver Dontrelle Inman, Chiles made his second consecutive start on Tuesday night as he registered two receptions for 30 yards and one touchdown.

On the ensuing Lions offensive possession, Paul McCallum connected on his fourth field goal of the game, this time from 10 yards out, cutting the deficit to 21-12 heading into the fourth quarter.

The Argonauts responded with a scoring drive of their own as Zach Collaros engineered a seven-play, 59-yard drive capped off by Noel Prefontaine’s 20-yard field goal, extending the Boatmen’s lead to 24-12.

Collaros demonstrated tremendous poise and composure on the drive as he completed 6 of 7 passes for 59 yards.

The Argonauts defence continued their dominating performance as linebacker Shane Horton recorded his second forced fumble of the season, a turnover that put an end to a long offensive drive.

Later, the Argos defence registered their third turnover of the football game as Jalil Carter jarred the ball loose from quarterback Travis Lulay. Janzen Jackson recovered the fumble and ensued to rumble down to the B.C. one-yard line prior to fumbling the football. Fortunately for the Boatmen, linebacker Matt Black emerged from the pile with possession of the ball.

Curtis Steele converted the turnover into points as he recorded his first career CFL touchdown.

Steele added another a late touchdown, securing a 38-12 victory for the Argonauts.

With the bye week on the horizon, the Argonauts victory on Tuesday night is critical as the team currently sits atop the CFL Eastern Division standings with a 3-2 record.

It was a night of firsts’ on many fronts for the Double Blue.

As for the B.C. Lions, Travis Lulay completed 20 of 29 pass attempts for 226 yards and one interception.

Running back Andrew Harris rushed for 107 yards on 16 carries, while adding 35 yards on six receptions.