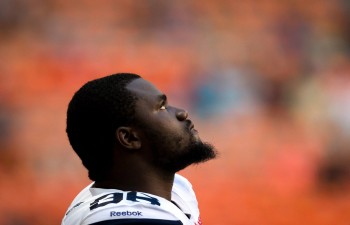 TORONTO – The most penalized team in the Canadian Football League in 2012 returned to their undisciplined ways on Thursday night in Vancouver.

The defending Grey Cup champions failed to seize any momentum, as it seemed every big play favouring the Argonauts was negated as a result of unnecessary penalties.

“We had a couple of big plays that got called back because of penalties, and (we) weren’t on the field that much in the first half,” commented Argonauts head coach Scott Milanovich following his team’s 24-16 loss in BC on Thursday night.

Offensively, the Argonauts registered just 14 first downs and accumulated a mere 249 yards of total offence. While things appeared to be out-of-sync right from the opening kickoff, discipline certainly had a significant impact in the outcome of Thursday night’s game.

“We weren’t disciplined enough to not take penalties and move the sticks,” stated Milanovich. “Early in the game we got ourselves behind, and definitely we let them do whatever they wanted defensively because they had a lead.”

Following his dominating CFL Offensive Player of the Week performance against the Hamilton Tiger-Cats in week one, Argonauts quarterback Ricky Ray struggled to get into any kind of rhythm on Thursday night as he completed 28-of-39 passes for just 215 yards through the air.

When the Argonauts offence did execute, it was far too late as Ricky Ray ‘s fourth quarter 7-yard touchdown run was a mere footnote in the disheartening defeat.

The Argonauts were playing from behind for virtually the entire football game, and failed to capitalize on a pair of second half turnovers, leaving the door open for the Lions to collect their first victory of the 2013 CFL season.

The Argonauts were penalized eight times on Thursday night including a roughing the passer penalty on defensive tackle Khalif Mitchell, which ultimately resulted in Andrew Harris’ decisive 4-yard touchdown run late in the fourth quarter. Harris’ major score was the knockout blow as the Lions handed the Argonauts their first loss of the 2013 campaign.

“I thought that was one that was arguable and could have gone either way,” said Milanovich regarding Mitchell’s roughing the passer penalty. “I thought Khalif did a nice job. I was proud of the way he handled himself.”

For Mitchell, Thursday’s game was his first trip back to BC since being traded to Toronto from the Lions on April 2, 2013. While logic would lead you to believe that Mitchell was playing with escalated emotion on Thursday, the Argonauts starting defensive tackle stated otherwise, and is simply excited to shift his attention to this week’s game against Saskatchewan.

“It was just another game,” began Mitchell. “I just have to find my place in it (the defence) and then all of a sudden everything blends in well together. Overall, I felt like I fit in good. We just have to figure out a way to come back and get it the next time.”

If there is any consolation, it stems from the defensive side of the football where the Argonauts continue to make positive strides after surrendering 34 points against the Hamilton Tiger-Cats in week one. Over the course of their past six quarters of football, the Boatmen have yielded a respectable 27 points while recording the team’s first forced turnover of the 2013 season.

While the defensive unit continues to gel together and the offence attempts to rediscover the effective balance from their season opening victory over the Tiger-Cats, discipline has become priority number one for the defending Grey Cup champs as the team looks to turn the page following Thursday’s disappointing loss in BC.

“We took too many penalties,” said Milanovich. “We couldn’t make the plays when we had to.”

Fortunately for the Argonauts, they will not have to wait very long for an opportunity to redeem themselves. The team returns back home for a meeting with this year’s Grey Cup hosts, the Saskatchewan Roughriders, at Rogers Centre this upcoming Thursday, exactly one week removed from their defeat in Vancouver.