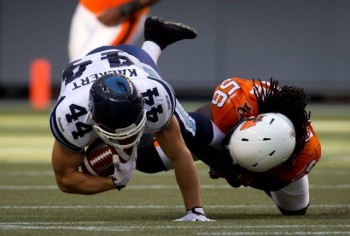 TORONTO – Trips to Vancouver have not been kind to the Toronto Argonauts in recent years, and the trend continued on Thursday night as the Lions defeated the Boatmen 24-16 in a defensive showdown. The last time the Argonauts won a game in Vancouver came on July 9, 2002 as Toronto defeated the Lions 30-22 beyond a crowd of just over 15,000 spectators. Thursday’s loss extends the Argonauts’ Vancouver losing streak to 11 consecutive games.

The loss ended the Argonauts’ six-game win streak, which dated back to week 18 of last season when the team clinched a berth in the 2012 CFL playoffs with a 31-26 victory over the Saskatchewan Roughriders.

For the second consecutive season, the Argonauts begin their campaign with a 1-1 record.

Following a high-scoring offensive showdown in week one against the Hamilton Tiger-Cats, Thursday’s game was a defensive stalemate as both offences struggled to sustain momentum throughout the football game.

Argonauts quarterback Ricky Ray entered this week’s matchup against the Lions coming off a dominating performance against the Hamilton Tiger-Cats, which saw him complete 24-of-34 passes for 368 yards and four touchdowns en route to earning CFL Offensive Player of the Week honours.

However, Ray and the Argonauts offence appeared to be out-of-sync on Thursday night, registering just 14 first downs along with 249 yards of total offence.

Defensively, Argonauts starting defensive tackle Khalif Mitchell made his highly anticipated return to British Columbia as he suited up against his former BC teammates for the very first time since being traded to the Boatmen on April 2, 2013.

As for the BC Lions, Thursday night’s home opener marked the franchise’s 1000th regular season game in their 60-year history. The Lions also received a boost on the defensive side of the football as linebacker Solomon Elimimian made his season debut after sitting out week one due to an ankle injury.

For two teams that expect nothing less than an appearance in the 101st Grey Cup in Regina, Thursday’s tilt between the past two Grey Cup champions certainly served as an important measuring stick.

Following a slow offensive start for both teams, the Lions opened the scoring as Travis Lulay orchestrated an impressive six-play, 57-yard drive capped off by Courtney Taylor’s 6-yard touchdown reception. The big play on the drive came courtesy of Nick Moore, who led the Lions down to the Argonauts’ 8-yard line with a 43-yard reception.

Moore concluded the game with six receptions for 107 yards, 93 of which came in the opening quarter of the football game.

The Lions continued to place pressure on the Argonauts defence as Travis Lulay marched BC deep into Argonauts territory, only to have the drive stall as Khalif Mitchell registered his first official sack as a member of the Argonauts. Lions’ rookie kicker Hugh O’Neil connected on a 23-yard field goal attempt, giving BC a 10-0 advantage.

A scary moment for Argonauts fans as Chad Owens was the victim of a hard hit from Lions defensive back Dante Marsh. Fortunately for the Boatmen, Owens returned to the football game on the team’s next offensive possession.

BC continued to add to their lead as Hugh O’Neil connected on a 34-yard field goal attempt, extending the Lions lead to 13-0. BC receiver Shawn Gore was injured on the drive as Argonauts defensive back Janzen Jackson delivered a hit while attempting to break-up a Travis Lulay pass attempt. Gore remained down on the turf for several minutes and was later diagnosed with a concussion.

On the ensuing Argonauts offensive possession, Ricky Ray eclipsed the 45,000-yard mark in his illustrious CFL career as he hooked up with Chad Owens for a 19-yard completion. The Argonauts veteran signal caller orchestrated a methodical eight-play, 40-yard drive capped off by Noel Prefontaine’s 42-yard field goal, putting the Boatmen on the scoreboard, down 13-3.

With less than three minutes remaining in the first half, Lions kicker Hugh O’Neil missed a 43-yard field goal, resulting in a rouge, which extended the Lions lead to 14-3 heading into halftime.

A frightening sight for Lions fans as star linebacker Adam Bighill was carted off the football field early on in the third quarter. The 2012 CFL Defensive Player of the Year nominee was in considerable pain and was favouring his left leg as he made his way off the field.

The Lions continued to pad their lead as rookie kicker Hugh O’Neil connected on his third field goal of the game, this time from 23 yards out, extending BC’s lead to 17-3 in the third quarter.

Making his fourth career CFL start, Argonauts defensive back Jalil Carter registered his first career interception late in the third quarter as he picked off Travis Lulay, setting up the Argonauts with favourable field position deep in Lions territory. Facing a third down situation, Ricky Ray connected with Chad Owens for a 5-yard completion, sustaining the drive. However, the Argonauts failed to capitalize on the turnover, resulting in a Noel Prefontaine field goal, cutting the Lions lead to 17-6.

The Argonauts special teams unit made their presence felt as Janzen Jackson blocked Hugh O’Neil’s punt attempt, providing the Argonauts with possession of the football deep in BC territory. The Argonauts converted the spectacular special teams play into points as Noel Prefontaine recorded his third field goal of the night, trimming the Lions’ lead to just eight points.

However, that was as close as the Boatmen would get as former Argo defensive back Lin-J Shell forced a fumble on Argonauts quarterback Ricky Ray, giving the Lions possession of the football with less than six minutes remaining in the fourth quarter. BC converted the turnover into points as Andrew Harris capped a seven-play, 41-yard drive with a 4-yard touchdown run, putting the Lions ahead 24-9.

Harris concluded Thursday night’s game with 15 carries for 103 yards rushing and one touchdown. The 26-year-old versatile running back also accumulated 49 yards through the air on six receptions.

Ricky Ray added a 7-yard touchdown run with less than a minute remaining, recording the Argonauts’ only touchdown of the football game. The Lions recovered the Argonauts’ ensuing onside kick attempt, securing their first victory of the 2013 CFL season.

Argonauts quarterback Ricky Ray became just the sixth quarterback in CFL history to eclipse the 45,000-yard mark. However, the veteran pivot struggled to find any rhythm on Thursday night as he completed 28-of-39 passes for just 215 yards passing and added a rushing touchdown late in the fourth quarter.

In his return to BC, Khalif Mitchell finished with two tackles and one sack.

As for the BC Lions, Travis Lulay concluded Thursday’s game 20-for-34 passes with 249 yards passing and one touchdown.

With the injury to Shawn Gore, veteran receiver Paris Jackson filled in admirably for the Lions’ star receiver as he recorded four receptions for 30 yards.

Defensively, Solomon Elimimian certainly made an impact in his 2013 season debut as he led the Lions with nine tackles on Thursday night.

After rotating through four different kickers in last week’s season opening victory over the Hamilton Tiger-Cats, the Argonauts activated kicker Noel Prefontaine from the team’s practice roster, stepping in for the injured Swayze Waters.

It was on December 18, 2012 that the Argonauts cut ties with Prefontaine, a 17-year CFL veteran. However, with just one kicker on the roster at the conclusion of this year’s training camp, Prefontaine returned to the team’s practice roster as an insurance policy in case of injury.

In his season debut on Thursday night, Prefontaine connected on three field goal attempts while handling the team’s kickoff and punting duties. The 39-year-old punted eight times for 353 yards and added five kickoffs for 241 yards.