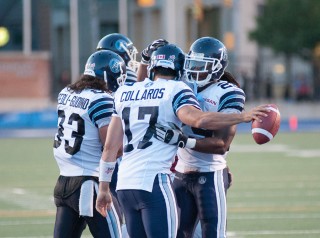 TORONTO – The Toronto Argonauts returned to their roots on Thursday night as the team concluded its pre-season schedule against the Montreal Alouettes at the legendary Varsity Stadium.

It had been 55 years since the Double Blue hosted a game at Varsity, the site of many famous Grey Cup championship games including the infamous ‘Mud Bowl’.

Argonauts quarterback Ricky Ray did not make the trip to Winnipeg for last week’s pre-season opener. The 33-year-old future hall of famer was back under centre for the Boatmen on Thursday night as he received his first in-game reps since the 100th Grey Cup championship game this past November. Ray led the Argonauts’ first-string offence for two series and finished 0-for-3 on the night.

The Argonauts opened the scoring as defensive lineman Khalif Mitchell sacked quarterback Anthony Calvillo deep in Alouettes territory, forcing Montreal to concede a safety. The sack was Mitchell’s first as a member of the Argonauts and attributed to the Boatmen’s early 2-0 lead.

Calvillo exited the game at the conclusion of the first quarter and finished 6-for-12 with 114 yards passing and one touchdown.

The Argonauts quickly responded with a touchdown drive of their own as Trevor Harris connected with Reggie Williams in the end zone for a 15-yard score, giving the Argonauts a 9-7 lead early on in the second quarter. The touchdown was Williams’ lone reception of the football game.

Coming off an impressive performance against the Hamilton Tiger-Cats in last week’s pre-season game, Montreal quarterback Quinton Porter entered Thursday’s game in relief of Anthony Calvillo at the beginning of the second quarter. Porter quickly marched the Alouettes deep into Argonauts territory as the drive was capped off by a 19-yard field goal from kicker Delbert Alvarado, putting the Als up 10-9 heading into halftime.

Porter exited the game following the second quarter and completed just 2-of-9 passes for 13 yards. Quarterback Tanner Marsh took over the team’s quarterback duties to begin the third quarter.

Argonauts quarterback Trevor Harris remained in the football game to begin the second half. Harris began the third quarter with an impressive drive as he marched the Argonauts deep into Alouettes territory. However, Argonauts kicker Swayze Waters failed to connect on a 41-yard field goal attempt, resulting in a rouge, tying the game at 10-10.

Harris exited the game midway through the third quarter and finished 9-for-16 with 79 yards passing and one touchdown. The second-year pivot continues to battle for the Argonauts’ backup quarterback position along with Zach Collaros, who entered the game later on in the quarter.

The Alouettes re-claimed the lead shortly after as rookie quarterback Tanner Marsh connected with Michael Campbell for a 47-yard touchdown. Marsh finished the game 4-for-7 with 79 yards passing and one touchdown.

Quarterback Josh Neiswander entered in relief of Marsh and played the remainder of the football game, finishing 6-of-8 with 84 yards passing.

The Argonauts special teams punt coverage unit made their presence felt as defensive back Shane Herbert blocked Delbert Alvarado’s punt, setting up the Argonauts with possession of the football near midfield. Zach Collaros converted the big play into points as he plunged across the Montreal goal line from 1-yard out, tying the game at 17-17. The big play on the drive came courtesy of running back Curtis Steele, who scampered 31 yards down to the Montreal 10-yard line.

Steele is currently battling for the Argonauts’ backup running back spot and turned in a strong performance on Thursday as he led the team in rushing with 87 yards.

The Alouettes once again re-claimed the lead midway thorough the fourth quarter as kicker Delbert Alvarado connected on a 37-yard field goal, making it a three-point game.

On the ensuing offensive drive, Zach Collaros orchestrated a methodical 5-play, 75-yard drive capped off by Juaquin Iglesias’ 29-yard touchdown reception, putting the Argonauts ahead 24-20 with less than three minutes remaining in the fourth quarter.

Mitchell Gale and Josh Portis did not receive any in-game reps on Thursday night as Argonauts head coach Scott Milanovich prepares to make a final decision on the team’s backup quarterback situation ahead of next week’s regular season opener.

Collaros showed tremendous poise as he led the Argonauts to victory and registered the game-winning touchdown pass. The second-year quarterback finished the game 5-for-9 with 72 yards passing and one touchdown. Collaros also showcased his mobility outside of the pocket as he ran for 14 yards on three carries and added a 1-yard touchdown run.

6,204 spectators packed into Varsity Stadium on Thursday night as the Argonauts concluded their pre-season schedule. Among those in attendance were Toronto Mayor Rob Ford and his brother, Councilor Doug Ford.

As for the action on the field, running back Curtis Steele had a strong performance as he registered 87 yards rushing on just eight carries.

Former Alouette Trent Guy led the way in the receiving game as he recorded five receptions for 41 yards.

Defensively, Jamie Robinson was stellar as he recorded five tackles including one tackle for a loss of yardage. Jermaine Reid and Khalif Mitchell each collected sacks in the victory, and defensive back Shane Herbert blocked a punt leading to an Argonauts touchdown.

The regular season will kickoff next week as the Argonauts host the Hamilton Tiger-Cats at Rogers Centre where the team will raise their 100th Grey Cup championship banner. However, before next week’s celebratory events, head coach Scott Milanovich and his staff will make their final roster cut down this upcoming Saturday.