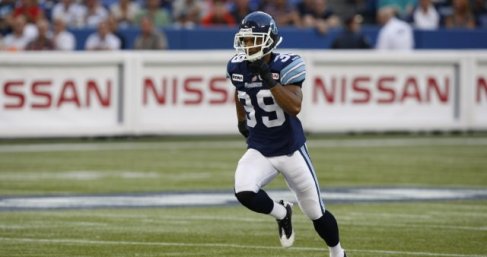 OAKVILLE – Toronto Argonauts safety Matt Black will be replacing a legend, a tall order for any individual designated with the responsibility of filling the void left by a player of Jordan Younger’s calibre.

Younger, a nine-year CFL veteran, spent eight seasons in Toronto as a member of the Argonauts and captured two Grey Cup titles in 2004 and 2012.  The 35-year-old Trenton, New Jersey native was also an influential leader both on and off the football field.

“I found out on Saturday with the rest of the team,” explained Black regarding his initial knowledge of Younger’s retirement intentions.  “It was surprising but I learned a lot from him in the four years that I played with him and I tried to soak up as much knowledge as I possibly could.”

Black, 28, is currently the most experienced player in the Argonauts’ defensive secondary.  The Toronto native was originally drafted by the Argonauts in the sixth round, 45th overall, in the 2008 CFL Draft and is now entering his fifth full season as a member of the Double Blue.

Although Younger has not officially filed his retirement papers, Argonauts general manager Jim Barker is prepared to move forward and expects the former Argonauts’ defensive captain to officially call it a career.

“Jordan has indicated that he is going to retire.  He hasn’t filed his papers yet but we expect he is retiring,” said Barker.  “He was a guy who was a Captain last year and somebody else has to pick up the slack.”

Over the course of the past two seasons, Black has dressed in all of the Argonauts’ 36 regular season games as well as the team’s three playoff games in 2012.  Black is revered as one of the premier special teams players in the Canadian Football League as he has registered a sensational 32 special teams tackles over the past two seasons.  He was the Argos’ back-up safety in 2012 and assures that he is ready to assume a larger role as a starter in 2013.

“Right now, I’m slated as the #1”, commented Black following a recent Argonauts’ training camp practice.  “I’m going to go out there and work my butt off everyday, try to earn the trust and respect of these guys out here and hopefully play well at the same time.”

In 2012, Younger was instrumental in the development of many young players on the Argonauts’ defensive unit.  At the beginning of last season, the Boatmen had two rookies in their starting secondary.  Younger’s tremendous leadership qualities will certainly be missed.  However, Matt Black affirms that he is prepared to do as much as possible in order to assist in a leadership role.

“I want to do whatever I can.  I just need to have the knowledge of the playbook and understand where everyone needs to be at any given time”, commented Black.  “They don’t need a raw-raw guy.  These guys are all pros.  They are grown men.  I just hope I can win their respect and trust.”

Argonauts head coach Scott Milanovich is confident that Black as well as fellow defensive backs will be able to step up and perform at a high level in 2013.

“I have no doubt that these guys we have here are going to be ready to play and even take it to a new level”, commented Milanovich.

Argonauts general manager Jim Barker shares the same sentiment as his second-year head coach and when asked if he was experiencing some nerves with the retirement of Younger, Barker responded, “Not at all.  By the time we kick-off, we’ll be fine.”

For Black, he is excited for the opportunity to win a spot as a starter on the Argonauts’ Opening Day roster.  While the expectations will be certainly be high coming off a historic Grey Cup victory as well as replacing a legendary member of the Double Blue, Black is perfectly comfortable with being “The Next Man Up” in this situation.

“It’s part of football but we’re excited about this season and I’m excited about the prospect of starting,” said Black.  “I wish him (Jordan) all the best.  I have to step forward now.”