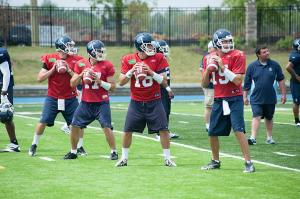 OAKVILLE – Toronto Argonauts quarterback Mitchell Gale is soaking up every moment of his training camp experience. Gale, signed May 16 by the Boatmen, was in attendance at the team’s rookie and quarterbacks camp this week in Oakville, Ontario.

Gale, the 23-year-old quarterback from Abilene Christian University in Abilene, Texas, threw for nearly 3,000 yards in his senior season. He completed 228-of-380 passes for 2,982 yards and 21 touchdowns as a senior. Throughout his 4 years at Abilene Christian University, Gale accumulated a remarkable 12,109 total yards. His impressive yardage total ranks first in school history and is also a Lone Star conference record.

Gale had previously attended mini-camp with the NFL’s St. Louis Rams, however, after not being selected in the 2013 NFL Draft, Gale turned his attention to pursuing an opportunity north of the border in the CFL. Gale attended the Toronto Argonauts mini-camp in Bradenton, Florida last month where he began making adjustments to his game in order to become accustomed to the Canadian style of play. Gale became familiar with the CFL after watching current Toronto Argonaut and former Abilene Christian Wildcat Tony Washington make his debut with the Boatmen in 2009.

“The fields are wider, the holes are bigger, and the spaces are bigger,” stated Gale as he noted the differences between Canadian football and American football. “It’s going to be an adjustment process. I just have to be patient.”

And who better to help with that process than future hall of fame quarterback Ricky Ray?

“That’s the best thing for a young quarterback,” said Gale when discussing playing alongside CFL Veteran Ricky Ray. “I’m going to bug him as much as I can and at the end of this whole thing Ricky is going to hate me because I’m going to keep picking his brain.”