The Argonauts entered the off-season with eight potential free agents, two of which have already signed new deals.  OG Joe Eppele and WR Spencer Watt will both be back through to the 2014 season.  Which six are left and who would be best to go for? Remember, there are a few players we did sign this off-season that could be roster fillers for some of our free agents.

Personally, I feel that the Argos should make it their mission to bring these two guys back! Without them, we most likely could not have won the Grey Cup this year.  The big issue of course, is money.  Both players will be asking for a heavy raise this break, and it will be up to Jim Barker to determine whether we can afford it.  Yesterday, along with the re-signing of Spencer Watt, Argos signed RB Adonis Thomas. Along with him, Gerald Riggs Jr. is still of course with the team.  There is no doubt that Kackert is the strongest in the trio, but the team is prepared should anything happen.  Do not forget that Chad Kackert was recently drafted by the New York Jets and they will definitely have their eye on him as they look to improve after an abysmal season this past year.

As for Foley, there is never anyone who can just come in and replace a veteran D-Lineman, and losing Foley would cause DC Chris Jones to make some big changes, and big decisions.  Foley is of course a key acquisition as he is a star Canadian player, a very valuable asset in this league.

Tristan Black definitely struggled this season, between playing time and playing in general. An underrated stat about Black, he led the league in Special Teams Tackles, for a team that needs all the special teams help it could get.  Also, Black’s defensive position is linebacker; Ejiro Kuale is a linebacker; Ejiro Kuale is no longer an Argonaut.  If we do decide to resign Black, it could be possible he sees more time at the LB position.  It is also possible he doesn’t see anytime on D, but can’t rule anything out at this point.

Easily one of my favourite players on the team.  I love the way he plays ball – flat out.  He brings talent, excitement, and overall heart.  For a team with such strong defence, losing McCollough would be a big hit. 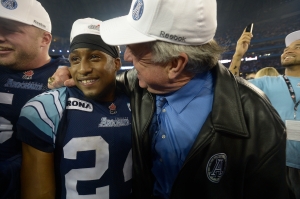 McCollough was a key CB for the defence providing key coverage and big hits.

The biggest issue with bringing back Mo Mann is his age.  He is getting older, and we are in a league where you need to get younger, especially when it comes to quick WRs. There are also a lot of reasons to bring him back.  One, is his veteran experience.  He knows what he is doing and he knows how to play in this league.

Second is his relationship with HOF QB Ricky Ray.

Ray has worked hard his entire career to develop relationships with receivers and it was difficult to leave those relationships in Edmonton to come to Toronto.  Luckily, this year he had WRs like Mann and Jason Barnes who Ray has had a good past with.  Of course, both receivers had their struggles this year and didn’t play all 18 games, but when they played and especially at the end of the season we saw the chemistry reignite.  It may be a good idea to feed off of that and bring Mann back.

Deciding whether or not to bring back OL Cedric Gagne-Marcoux is a tough decision. When he plays, he plays well.  His season ended early this year after an injury had him on the 9-game Injured List.  Since then, the Argos O-Line struggled, but learnt and at the end of the season, saw themselves protecting Ricky Ray very well, one play allowing him to run right through to the endzone for his only rushing TD of the season.  Could Gagne-Marcoux disrupt the new found chemistry?  That will be up to Jim Barker to decide

1 Comment on Free Agent Tracker: Who is Left and What Are Our Options?