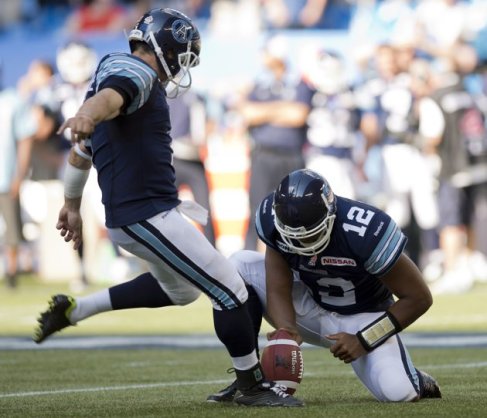 MISSISAUGA – Toronto Argonauts General Manager, Jim Barker made one of his most difficult decisions as a GM on Tuesday.  Barker announced the release of veteran K/P Noel Prefontaine. The 38-year old K/P missed a majority of the 2012 regular season with a significant hip injury that was originally believed to end his 2012 campaign. However, Prefontaine managed to return for the team’s final four regular season games including the Argonauts’ three playoff games. In seven regular season games, Prefontaine punted 44 times for 1899 yards and connected on 10-of-15 field goal attempts. He currently holds team records for kickoffs and kickoff yardage (632 for 37,250), and is second all-time for most field goals made (248).

Despite being officially released from the club, Prefontaine says that there is still a slight possibility of returning to the Boatmen in 2013.

“Playing for Toronto isn’t completely out of the picture. It’s something that has to play out over the next couple of months,” commented Prefontaine following his release on Tuesday.

The 12-year CFL veteran has played in 198 regular season games as an Argonaut and has won two Grey Cup Championships while donning the Double Blue. Prefontaine understands that football is a business and therefore, the veteran holds no resentment towards GM Jim Barker and his staff.

“I make a fairly decent amount of money and coming off of hip surgery and not playing all the games I kind of anticipated this happening. We play in a league where there is a salary cap and where business decisions have to be made. This was strictly a business decision. Both Scott (Milanovich) and Jim (Barker) would like to keep me around”.

Prefontaine remains interested in playing in the CFL in 2013. He has hired an agent, who is searching for opportunities with the other seven CFL teams.

“Toronto has always been in my heart. My home is here. I’ve been a lifetime Argo for the most part. It would have been nice to stay and get things done. But at the same time I have to think about my family. At this point, this is the best decision for me,” said Prefontaine on Tuesday.

General Manager, Jim Barker also took the opportunity to thank Prefontaine for his dedication and loyalty to the Argonauts organization.

“We’d like to thank Noel for his professionalism and his winning attitude as a member of the Argonauts. As we continue building our team for long-term success these kinds of difficult decisions are necessary when looking at every part of our football club. Releasing a player like Noel is never easy but making this move, at this time, gives him a chance to explore all other CFL opportunities that may be available. We wish him continued success in the future.”

The Argonauts carried two kickers for a majority of the 2012 season, including the playoffs when Prefontaine controlled the team’s punting duties and Swayze Waters commanded the field goal unit.

In his first season as a member of the Argonauts in 2012, Waters connected on 32-of-43 field goal attempts and also contributed 2,732 punting yards.

The 25-year old is expected to anchor the Argonauts’ kicking duties in 2013.