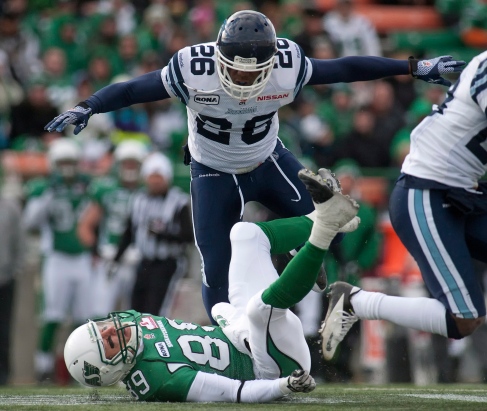 The Toronto Argonauts certainly did not make it a painless entrance into the 100th Grey Cup playoffs.

The Argos finally punched their ticket to the 2012 edition of the CFL postseason this past Saturday afternoon in Saskatchewan against a resilient Riders’ squad. The Argonauts’ ended a season-long three-game losing streak with their thrilling 31-26 victory at Mosaic Stadium in deep-freeze Saskatchewan weather conditions.

However, the comfy and cozy confines of the Rogers Centre have not been very kind to the Argonauts so far this season as they boast an unimpressive 3-5 record at home in 2012. The Argos’ will conclude their CFL regular season schedule this Thursday evening against the playoff-hungry, Hamilton Tiger-Cats. The Ticats enter the final week of the CFL season still in the hunt for the sixth and final playoff spot in the Canadian Football League.

The Ticats victory over the Winnipeg Blue Bombers last weekend, in the final regular season game at Ivor Wynne Stadium, maintained the possibility of a Tiger-Cats playoff appearance.

A Hamilton victory on Thursday evening in Toronto and an Eskimos loss on Friday night against the Stampeders would make for an electrifying Argonauts – Tiger-Cats showdown in the Eastern Semi-Final on November 11 at Rogers Centre.

Despite the prospect of another exciting “Battle of Ontario” playoff matchup, the Argos’ would much rather deliver the knock-out blow to their East Division rivals and put an abrupt end to their 2012 campaign.

“Anytime you put the pads on, you play to win and this week is no different”, commented Argos Head Coach, Scott Milanovich when asked what approach his team will take into this week’s game against the Tiger-Cats.

The Argonauts also have the opportunity to secure a season-series victory over Hamilton on Thursday evening. The Argos’ won back-to-back games against the Ticats in early September and will look to collect their third win of the season over their archrivals.

Scott Milanovich did not release any information regarding the possibility of resting his starters on Thursday evening in the Argos’ regular season finale but he assures that regardless of who is on the field on Thursday, they will be focused on taking care of business against the Tiger-Cats.

“It’s about this week and after this week, then we will concern ourselves with the first round of the playoffs”, commented Milanovich.

As for the big picture, Milanovich also added that it is in his best interest to take care of his team first prior to focusing on the opposition in the final week of this 2012 regular season.

While there may not seem to be much at stake for the Argonauts on Thursday evening, it would definitely be reassuring to enter the playoffs on a winning note and with momentum on their side.

It also seems as though the Argonauts’ have found their comfort zone and are playing their best football of the season at the most critical time. Based on the sense of urgency the Boatmen showed last weekend in Saskatchewan, it looks to be that they’re heading into the 100th Grey Cup playoffs with plenty of optimism and confidence.

Ricky Ray has been sharp for the Argonauts since returning to the lineup after missing three consecutive games due to a knee injury. Ray has thrown four touchdowns and at least 300 yards in each of his two starts following his short stint on the Argonauts injury list.

The 32-year old veteran seems to have returned to the form that attributed to his two Grey Cup titles in 2003 and 2005 as a member of the Edmonton Eskimos.

Linebacker, Brandon Isaac will be absent from the Argos’ lineup on Thursday evening against Hamilton as he will be serving a one game suspension for his helmet-to-helmet hit on Riders’ quarterback, Darian Durant late in the Argonauts’ playoff clinching victory on Saturday afternoon.