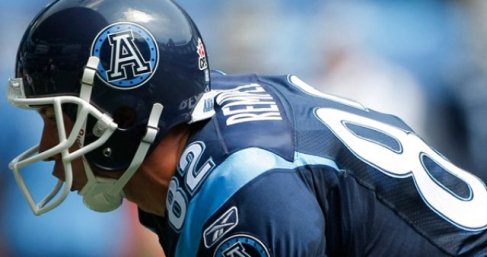 TORONTO – The long snapper position in the CFL is one of the most underrated jobs in professional sports. In actuality, the long snapper possesses a more important role in late game situations than any other player on the football field.  Prior to the celebrations following a last-second field goal, it is the long snapper that has the ball in his hands with the outmost trust of his entire football team to place the ball in the correct spot in order for the kicker to send their team home with a victory.

Toronto Argonauts’ long snapper, Chad Rempel, has seen his fair share of last-second dramatics over the course of his eight-year CFL career.  Rempel has had the opportunity to work with one of the greatest kicker and holder tandems in CFL history.  Tiger-Cats linebacker, Kevin Eiben, and injured kicker, Noel Prefontaine, anchored one of the most consistent kicking units in the entire CFL during their time with the Argonauts.

“I learned a lot from Eiben and Prefontaine”, said Rempel following a recent Argonauts’ practice.  Chad is now the veteran presence amongst one of the youngest and most inexperienced kicking units in the Canadian Football League in 2012.  Following the departure of Eiben to Hamilton and a season ending hip injury to Prefontaine, Rempel now finds himself working with rookie holder, Trevor Harris, and rookie kicker, Swayze Waters.

Rempel leads a kicking trio that has recorded the most field goals in the CFL so far this season. Swayze Waters is also the only kicker in the Canadian Football League to have made at least three filed goals from 48 yards or longer.

“I’m working with some younger guys and it’s been great.  Trevor is a true professional and he has done a great job in his first year as a (holder).  Swayze is Swayze and if we get the ball in the right position for him, he just does his thing”, commented Rempel when asked about his young holder and kicker tandem.

Prior to beginning his CFL career, Chad attended the University of Saskatchewan from 2001-2004 where he was a star slotback for the Huskies football program.  Rempel recorded 120 receptions for 2,352 yards, and 17 touchdowns over the course of his CIS (Canadian Interuniversity Sports) career.  Chad also assisted in leading the Huskies to two Vanier Cup Championship games in his three-year tenure at the University of Saskatchewan.

Following his outstanding CIS career, Rempel was drafted in the third round of the 2004 CFL draft by the Edmonton Eskimos.  Unfortunately, shortly after being drafted, he was released and ensued on a tumultuous journey throughout the Canadian Football League. Rempel has played for five of the eight CFL teams during his eight-year professional football career including two separate stints with the Hamilton Tiger-Cats, Montreal Alouettes, and his current team, the Toronto Argonauts.

As Rempel explains, it was his hard work and determination that assisted him in developing into a long snapper in the CFL.

“I was more than six years into my CFL career.  We had struggled to find consistency at the position so I picked up a ball and I began snapping to my girlfriend, who is currently my wife, after practices.  About a month after I began practicing, I got a chance to do it in a game and I’ve been long snapping for the (Argonauts) ever since”, said Rempel during a post practice interview.

Rempel has played a majority of his professional football career at the slotback position and he admits that the adjustment from slotback to long snapper has been difficult over the past couple of seasons.

Chad has started a majority of the Argonauts’ regular season games at long snapper over the course of the past two seasons. On occasion, Rempel has also received playing time at slotback and tight end for the Argos.

According to Rempel, there are plenty of different attributes to consider when you step up to the line of scrimmage as a long snapper on any punt or field goal attempt.

At six feet, two inches tall and 227 pounds, Rempel has the size and strength of a slotback that can be utilized in any role that the Argonauts require.  His tremendous size allows him to be an extra blocker on certain running plays and he can also be of service on the Argonauts’ special teams units.  Although he is already the team’s long snapper, he is also a member of the team’s kick coverage units.  His speed and quickness as a slotback translates to success when covering kickoffs.

The Toronto Argonauts are fortunate to have one of the most versatile and consistent long snappers in the entire Canadian Football League.  In order for any football team to succeed, they require a long snapper who is dedicated and passionate about their job. While long snapping remains as one of the most underrated and least glamorous positions in all of professional football, it requires, without a doubt, an incredible amount of love and devotion to the game of football in order to truly appreciate “The Art of the Long Snapper”.