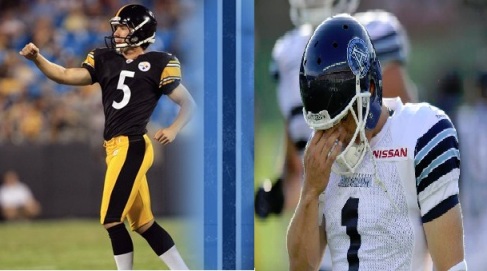 Well its no surprise that the lackluster performance continues to shine through the Argos kicking squad, but to be honest the Argos special teams is still a work in progress. While two missed fields goals have been returned for scores, if the Argos would have covered their lanes and executed their tackles more efficiently none of this would have occurred.

None the less the bigger story is on the kicking unit. Not only has Prefontaine been dismal on his field goal attempts (10 att. /15 comp.) but to add insult to injury (literally) Prefontaine has fallen victim to the injury list. The Argos have just placed Prefontaine on a 9-game injured list, because of per-existing hip injury, which will open up the question of whether Prefontaine’s era as an Argo or a Pro footballer for that matter is about to come to an end.

Not to worry though, just as Prefontaine falls, the Argos get straight to work and fill that now kicker void. Import Swayze Waters has been welcomed to the Argos roster as a fresh young kicker. Previously apart of the Pittsburgh Steeler and Oakland Raider organizations see why Mr. Waters not only has a sweet name but a booming kick: http://www.youtube.com/watch?v=hNRcff6P_Sc Swayze hopefully bringing back a shine to the Argos dull kicking unit!

A sports fan and a communications expert. Having fun and trying to make a living at it.