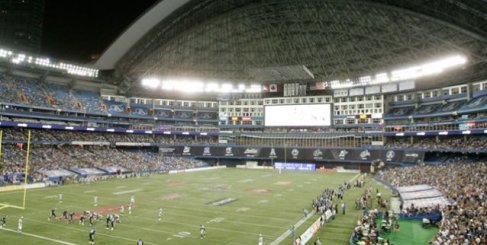 The Calgary Stampeders opened up their 2012 CFL campaign with a 38-10 victory over the Argos East Division rivals, the Montreal Alouettes on Canada Day. The Stamps enter this week’s matchup against the Argonauts looking to continue their dominance on the offensive side of the football. In his fourth career CFL start, Drew Tate was very impressive and showed why the Stampeders felt comfortable parting ways with long time starter, Henry Burris during the offseason. Tate went 25 for 35 with 299 yards passing, one touchdown and two interceptions. Tate had tremendous command of the offense and utilized big receiver Nik Lewis very effectively. Lewis is potentially the most physical wide receiver in the entire CFL and had one of his best opening week performances on Canada Day. “Thick Nik” as he is known by many fans recorded 12 catches for a total of 105 yards and a touchdown reception in the Stampeders victory over the Alouettes. Calgary will look to definitely utilize his size and strength against the Argos fairly inexperienced secondary on Saturday in order to come out with a victory. While Drew Tate and Nik Lewis will be the focal points of the Stampeders passing attack, Canadian superstar, Jon Cornish will be the centerpiece of the Stamps running game on Saturday afternoon. Cornish took over for Joffrey Reynolds in week 13 of last season and he never looked back. Cornish led the Stamps in rushing with 863 yards in just 6 games as a starter. He also led the league in rushing touchdown’s with 9 rushing scores a year ago. A staggering number that no one came even close to matching was his average of 7.3 yards per carry last season for the Stamps. He is truly a dual threat for the Stampeders with 26 catches out of the backfield a season ago. In week one he had 18 carries for 86 yards and two touchdowns, which led all running backs after one week of play in this 2012 CFL season. The Stamps will look to continue to feed him the ball and attempt to breakdown a sturdy Argos defense that surrendered only 19 points in week one.

The Stampeders most impressive performance in their week one victory over the Alouettes was their defense. The Stamps held the Als to only 174 yards passing including two interceptions off future Hall of Famer, Anthony Calvillo. The defense also held the leagues leading rusher from a year ago, Brandon Whitaker, to only 43 yards rushing on 11 total carries. The Stamps will now turn their attention to an Argonauts offense that is still looking to find their groove. Calgary will certainly look to prevent Cory Boyd from bouncing back after a disappointing week one where he only had 8 carries for 48 yards.

The Stampeders will see a familiar face on the opposing sideline this weekend. Argos Defensive Coordinator, Chris Jones left Calgary this offseason in favor of joining Scott Milanovich in Toronto. The Stamps are seemingly the underdogs in this matchup but they definitely have all the necessary weapons to make it a difficult home opener for the Toronto Argonauts.

The Toronto Argonauts enter week two of the CFL season looking to bounce back after a disappointing result in Edmonton against the Eskimos. The Argonauts were very undisciplined taking a total of 18 penalties resulting in 118 free yards for the Eskimos. Ricky Ray will certainly be motivated to show Argonauts fans what he can really bring to the table this season in his first home start as an Argo. The Argos abandoned the running game for much of their matchup against Edmonton. Cory Boyd carried the ball only 8 times for a total of 48 yards rushing. Scott Milanovich talked about getting Boyd more involved in the passing game and despite the fact that he had 10 catches in week one, it only resulted in only 9 yards receiving. The Argos should look to attack the middle of the Stamps defense by pounding the football with their star running back and not to mention running the football will only make the offensive line feel more comfortable in front of Ricky Ray. Andre Durie, the Argos best playmaker from a year ago had only 4 touches in week one against the Eskimos. The Argonauts should look to utilize Durie both out of the backfield and in the passing game this week against the Stampeders. Chad Owens hopes to build off a solid week one performance in which he had 6 catches for 100 yards. The thought entering this week two matchup is that the Argos have the advantage because of Chris Jones’ familiarity with the Stampeders and their defensive system. He may contribute to the offense this week because of his knowledge of the Stampeders defensive formations and special tactics. Ricky Ray and the rest of the Argos offense hope to have a very successful home opener against the Calgary Stampeders.

The Argonauts special teams in week one was absolutely horrible. Noel Prefontaine went 2 for 4 in field goal attempts and may have truly cost the Argonauts a week one victory.

The stiff Argos defense may be getting a boost this weekend as Kevin Huntley looks to make his 2012 debut. He missed the Argos opening game in Edmonton due to injury and will certainly provide size and strength up front on the Argos defensive line. Marcus Ball was impressive last weekend for the Argos as he recorded 6 tackles and was able to get tremendous pressure on Steven Jyles in many blitz packages. The Argos will definitely need to get pressure on Stamps quarterback, Drew Tate as well as stop Jon Cornish in order to earn their first victory of 2012.

Over the past two seasons the Argos have a 3-1 record against the Stampeders and two of those victories have come at Rogers Centre.